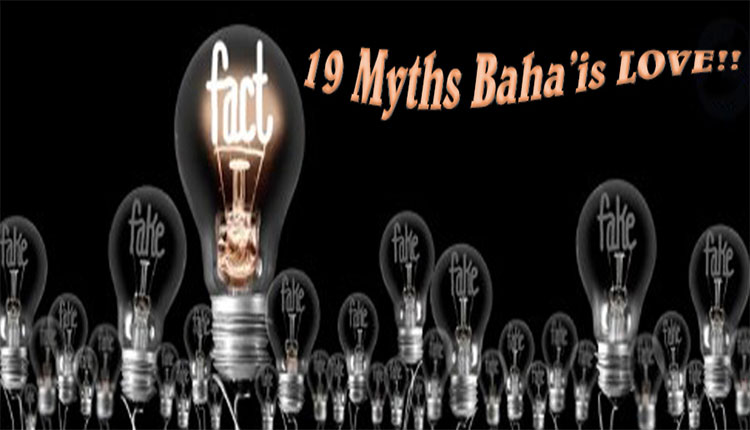 Myth #1: The Bab and Baha’u’llah were anti-slavery

Truth: Both owned, bought, and sold black slaves. Baha’u’llah forbade the slave trade in the Aqdas, not slavery itself. One of the first laws that the Confederate States of America in acted was to make the slave TRADE illegal. But slavery itself continued. Baha’is in the Ottoman Empire and Egypt continued to own black slaves until these areas fell under British rule.

Myth #2: Baha’u’llah was tolerant of homosexuality because He told Baha’is to have a “sin-covering eye”.

Truth: Baha’u’llah called homosexuality HARAM (absolutely forbidden) for Baha’is. The term sin-covering eye referred to “minor sins” (sangria). There is no one Arabic word for “sin”. There is one for major sins (sangria) and one for minor sins (sangria). Baha’u’llah used the one for minor sins. He considered LIWAT (male homosexual acts) and SIHAQ (female homosexual acts) to be among “satanic deeds”; another name for MAJOR sins. He likened LIWAT and SIHAQ to ZINA (adultery/fornication).

Truth: No way. He said that Universal Peace would be established in 1957. He said that under the Law of Moses a thief’s hand could be cut off. Both untrue. He identified the “24 Elders” in the Book of Revelations as “the Bab, the 18 Letters of the Living, and 5 others” in one place, and identified the same 24 Elders as the 24 Guardians during the Baha’i Revelation in another, contradicting Himself. He did refer to the “Infallible Pen” and indeed, nothing He wrote has been contradicted by science or history, but many things He said or purported to have said have been contradictory to science, history, and even Himself.

Myth #4: Baha’i Holy Law does not mention abortion, and thus it is up to the House to rule upon it.

Truth: The Kitab-i-Aqdas was the Addendum to the Babi book of Laws, the Qayammul-Asma’, which forbade abortion and divorce. Baha’u’llah abrogates the no divorce law, but not the no abortion law. The Aqdas cannot be understood without the Asma, because it is only the Addendum to the Asma. Shoghi Effendi repeatedly said that abortion was “absolutely forbidden” for Baha’is, without making exceptions to this rule.

Myth #5: The Central Figures and Shoghi Effendi preached against racism, and proclaimed that all races are equal in every respect.

Truth: Neither The Bab or Baha’u’llah mentioned anything about the oppression of blacks. They had black slaves. They did NOT write that races are “equal”. ‘Abdul-Baha did NOT say that the races were equal, but that the Persian race was the most intelligent at birth. Shoghi Effendi NOWHERE wrote or said that the races are equal in intelligence. He did NOT condemn scientific racism (something he was taught at Oxford as scientifically proven fact), but rather “racialism”; the philosophy that one race can dominate others.

Myth #6:  Baha’i teachings say that Jesus never arose from the dead, but His body is still buried somewhere in Jerusalem.

Truth: Baha’u’llah said that Jesus had the “Power of the Great Ether” and this is why He arose from the dead. ‘Abdul-Baha’s explanations of the Resurrection of Christ in “Some Answered Questions” were TA’WIL (esoteric explanations of literal events). He said that the disciples “saw Christ living” after His death. He did not arise in a physical body, but in His ethereal form which ‘Abdul-Baha called the “Reality of Christ”.

Myth #7: Baha’i Writings say that Christ came to unite cities, and to improve the status the rights of minorities and women.

Truth: Nothing in the Writings, nor in the Pilgrim’s Notes, says anything close to that. The Writings say that Christ came to offer Himself as an atonement for the sins of all mankind. That was His mission; nothing about uniting cities or trying to improve the rights of women or minorities.

Myth #8: Krishna was a black Manifestation of God.

Truth: Krishna was “dark blue” (the meaning of the name “Krishna”) and was born with a very rare birth-defect that turns light skin blue.

Krishna is presented in the Bhagavad-Gita, and in Hindu tradition, as an Aryan of the Warrior caste. All of the Manifestations of God in the Adamic Cycle have been Caucasian men.

Myth #9: The next Manifestation of God will be a woman.

Truth: The Writings say that the Prophets have various “ranks”. A Tablet of Abdul-Baha says that the Prophets can be likened to the members of a human body, with Brain, Heart, and other members. He likens Baha’u’llah to the Brain, Jesus to the Heart, and the Other Prophets to the less important Members of the Body. Shoghi Effendi called Baha’u’llah the “Supreme Manifestation of God”.  By “distinguish between Them” Baha’u’llah was NOT condemning allotting to them ranks, but rather condemning what the Christians and Jews were doing his day, accepting some and rejecting others as Prophets.

Myth #11: The World Order of Baha’u’llah will be established via the “World Peace” Message, when everyone realizes that we can only have World Peace by becoming Baha’is, then they will become Baha’is.

Truth: Baha’u’llah in a pilgrim’s note says how the World Order of Baha’u’llah will be established. It will come after a World Union is formed. The World Union will outlaw religion because of wars and terrorism and enmity between religious groups. Religion will be outlawed by the World Union. However, in one or two generations the leaders of the World Union will see that mankind will become too corrupt without organized religion, so they will choose the Baha’i Faith among all the religions as the most ecumenical and suiting of the needs of world unity, and thus all children will then be raised as Baha’is, and that will commence the World Order of Baha’u’llah.

Truth: There is NOTHING in the Writings nor the pilgrim’s notes that says this! Shoghi Effendi recognizes only four “atonements”:

*Ishmael (offered as a test upon Abraham)

*Jesus (died the sins and iniquities “of all mankind”)

The ONLY Manifestation of God in that list of Jesus Christ. His death was a “universal atonement” in that its effects had an effect “on all created things”.

Myth #13: The depictions of Hell-fire and Hell in the Qur’an are mere symbols, and were created by Muhammad as a way to frighten ignorant Arabs into getting them to follow the religion of Islam

Truth: There is NOTHING in the Writings or the pilgrim’s notes that even suggests this! In His Tablet to Varqa, Baha’u’llah is quite explicit that Paradise and Hell-fire are metaphors in this life, but “realities” in the Afterlife, and that if such realities did not exist in the Afterlife, then the Cause of God was pointless.

Truth: The Writings say that the “Torah” (five books of Moses) were written by Him, contradicting what liberal scholars say on the issue. There is NOTHING in the Writings or pilgrim’s notes to even suggest that the Bible is full of “myths” or “errors” but that certain parts of the Bible should be considered parable or metaphor rather than literal (such as Eve eating a piece of fruit after being tempted by a talking snake).

Truth: The “Principles” were first called the “Foundations of World Unity” and they were NEVER put forth as the summon bonus of Baha’i beliefs, nor even basic Baha’i beliefs. They were compiled as “Foundations” to present to world peace clubs and race unity clubs, to find common ground with them, so that Baha’is could speak at such meetings to talk to others about the Faith.

Myth #16:  Baha’u’llah said that what the Afterlife was like is beyond description, meaning we cannot possibly know what it is like, therefore the Qur’anic descriptions of the Afterlife must merely be parables of something we can’t possibly understand.

Truth: Baha’u’llah described the conditions, including the stench, of the Siyah Chal (“Black Pit”) as being “beyond description”. This does not mean that we cannot imagine it, nor that the Siyah Chal was simply a metaphor or parable of some personal suffering of His that we cannot comprehend. Baha’u’llah affirms the Qur’anic descriptions of the Afterlife in His Tablet to Varqa.

Myth #17: The Writings say that Heaven and Hell are conditions of the soul, not geographic locations. Therefore, Paradise and Hell have no existence other that in our own souls.

Truth: Sufi writings say the same thing, and Baha’u’llah once studied among the Sufis of Kurdistan. But the Sufis did not deny the existence of Heaven and Hell. They deny they are “geographic locations” as the Muslims were taught for centuries (i.e. Paradise was just beyond the fixed stars. Fixed in a crystal sphere, and Hell was under the earth in great caverns of fire). The Sufis said we create our Heaven or Hell, depending upon the condition of our soul at death. In other words, if our soul is in Heaven at death, a Heaven is created for us.

If our soul is in Hell at death, a Hell is created for us, in the Unseen World, which is as real as this World, but is ethereal instead of physical. The Unseen World exists in every location where the physical Cosmos exists. For years Baha’u’llah used the title Baha’u’Din, the name of the founder of a popular Turkish Naqshbandi Sufi sect. Baha’u’llah wore a Darvish Turban of the Naqshbandi Sufi Sect from the time He lived among the Naqshbandi (1863-5) until His death in 1893.

Myth #18: The Writings say that reincarnation is not true, and impossible.

Truth: The Writings of the Bab speak of “return”, that the souls of the Prophets, the Saints, and “certain Chosen Ones” will RETURN in every Dispensation. In other words, the soul of Muhammad returned as Mulla Hussein, the first believer in The Bab. The Bab was the “return” of the Imam Mahdi, a young boy who died falling into a well 1000 lunar years before The Bab declared He was the Mahdi. Baha’u’llah wrote He was the return of “Jesus, the spirit of God”. Abdul-Baha said that “human souls” do not return to THIS planet.  The Sufis taught that when a man became a WALI (“Saint”) he no longer had a human soul, but an angel soul or a divine soul. This occurred when the Seeker extinguished his “ego” (human soul), and his nafs (self) is fana (“blown out like a candle”). Other incarnations on other planets are not ruled out, and seem to be at least hinted at in some Writings and pilgrim notes. The souls of Prophets are pre-existent, and thus not human souls. The souls of the Saints are not “human souls” because they have extinguished their human souls and the only eternal thing that remains in them is the Divine, or Angelic, Soul.

Myth # 19: The purpose of the Baha’i Faith is to establish World Peace/Race Unity/the Equality of Men and Women/Universal Education/equal pay for equal work/socialized medicine/national health care/Esperanto as the Universal Language, etc.

Truth: The purpose of the Baha’i Faith is to establish the Justice of God on Earth; to end injustice in all forms, so that Mankind may be spared from the Wrath of God (final extinction).

“Myths” …no matter how popular they are, cannot help the Cause of God, but hinder it. Only the TRUTH can make us free!