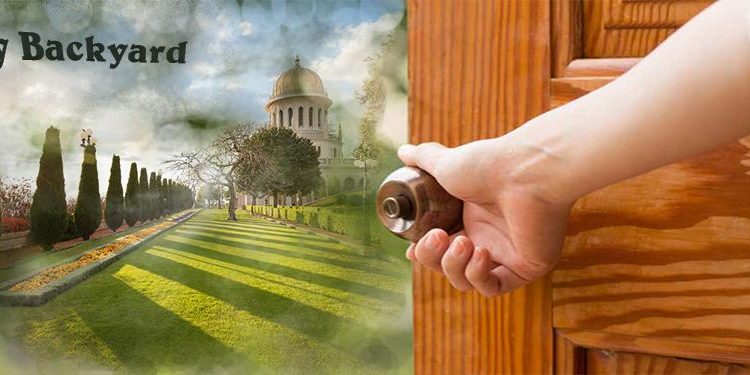 A Film about Bahai Involvement in World Politics and the Military

“Baha’is in My Backyard” is a documentary film that lifts the curtain on a seemingly “feel good” religion and its involvement in world politics and the military.
A retired Mossad agent, a CIA seducer, a carpenter, a religion expert and a dead scientist, are all characters in this scandalous, yet humorous investigative film, which combines classic straightforward interviews, with unique access to the Baha’i gardens.
Baha’is in My Backyard offers a rare glimpse into the dealings of the Baha’i religion, which plays a prominent role in the current history of Haifa.
World peace is the objective of the Baha’i Faith – a mysterious and widespread religion. This is an investigative road movie about two overachieving directors, a prophet’s great-granddaughter, and a CIA agent. A detective-like quest after the Baha’i religion, which originated in Iran some 150 years ago, and ended up building its world center on Mount Carmel in Haifa, Israel.
Asaf grew up next to the beautiful Baha’i gardens, staring out of his bedroom window when the Baha’is excavated the entire Mount Carmel and built a secret underground city. He shared his thoughts and fears with Naama. They join forces to try and find out what lies beneath the Baha’i Gardens – and document it cinematically. The directors’ mission begins in their backyard, using their un-polished detective skills to garner as much information about the underground city as possible. They make numerous trips to the Baha’i gardens as “tourists”, trying to find loop holes which will gain them access them to the floors below. They meet people who have worked for the Baha’i underground, and who are willing to anonymously reveal what lies beneath.
The story turns international, when the two directors follow a worldwide espionage affair. Dr. David Kelly, the MI6 agent – an expert on weapons of mass destruction, and a Baha’i follower – was found dead in the woods of Oxford shire, England. The directors meet with a British intelligence analyst, the head of the Baha’i Faith in England, and an investigative journalist. They meet some elderly and sweet Baha’is who knew both Kelly and the American CIA agent, but who are uncomfortable giving out ‘classified’ information. It is only then that Asaf and Naama realize that chasing a CIA agent and a dead scientist is stretching their detective skills.
They return to Israel and convince the Baha’i administration in Haifa to show them around the underground city of Mount Carmel. (From the US, in English and Hebrew, English subtitles) (Documentary)