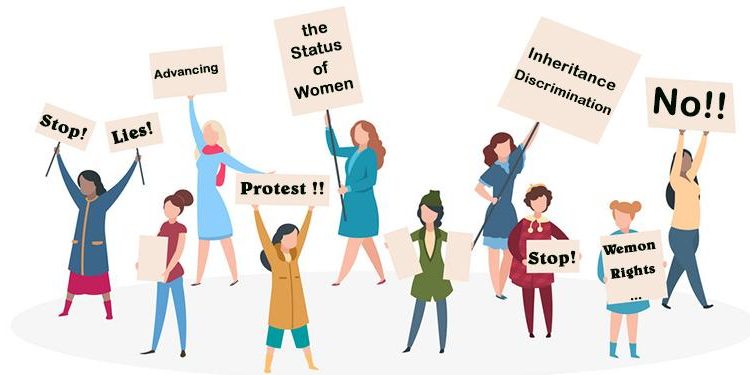 Advancing the Status of Women? Or only Men?

Amongst the many doctrines adopted by the Baha’is to attract converts to their fold is the concept of “Advancing the Status of Women”. Baha’is are often found to shout themselves hoarse over this concept as if they were the first to put forth the concept of equality of men and women. The Baha’is use this doctrine very aggressively to secure a place in the minds of the people of today’s liberal world.
It is interesting to understand why the Baha’is are so very vociferous about this principle, unlike the other principles (for example, the concept of a universal language). Perhaps it is due to the fact that women constitute approximately half of world’s population. Or maybe it is possible that winning the interest of a woman will have a positive effect on the next generation. Perhaps above all, they wish to demonstrate themselves as a very progressive religion. Nevertheless, it is essential to verify the truth in this principle advanced by the Baha’is as being one of their own.
I have chosen to confine my arguments within the Baha’i Faith, while Islam has evidently laid down regulations to advance the status of women centuries earlier.
To highlight their commitment, the Baha’is are prolific in talking about this principle. Words from Bahaullah, Abdul-Baha and Shoghi are quoted to express the Baha’i devotion to women.
Abdul-Baha is quoted to have said in Promulgation p 375, “The world of humanity is possessed of two wings: the male and the female. So long as these two wings are not equivalent in strength, the bird will not fly. Until womankind reaches the same degree as man, until she enjoys the same arena of activity, extraordinary attainment for humanity will not be realized; humanity cannot wing its way to heights of real attainment. When the two wings . . . become equivalent in strength, enjoying the same prerogatives, the flight of man will be exceedingly lofty and extraordinary.
I urge you to read the above statement to absorb its importance.  As per Abdul-Baha – the sole interpreter of the Baha’i Faith -women must enjoy equal authority and perform the same activities as men. Till this is not done, humanity will never reach attainment. Fair enough.
However a question arises here. Why has the Universal House of Justice – the apex governing body of the Baha’i Faith – never had any female representation? This is not due to the lack of qualified women amongst the Baha’i Faith. Rather women are expressly debarred from becoming members of the Universal House of Justice!
It is clear that the primary Baha’i body, which must be obeyed by all Baha’is, refuses to adhere to the words of the founders of the Baha’i Faith. A factual indication that Baha’is are not interested in advancing the status of women, but are simply paying lip service to deceitfully attract new converts.
Historically central Baha’i figures, namely Bab, Baha and Abdul Baha never regarded women as equal to men. The 19 Apostles of Bahaullah were all men! Even, among the 18 Letters of Living of Bab, there was only one woman! I wish to draw your attention to the following statistics.
Members Women Members Percentage
Letters of Living of Bab 19 15%
Apostles of Bahaullah 190 0%
Bahaullah’s Hands of Cause 40 0%
Abdul-Baha’s Special Disciples 195 26%
Abdul-Baha’s Hands of Cause 40 0%
Shoghi’s Hands of Cause 426 14%
Universal House of Justice 90 0%
Please note that leave alone equality, Bahaullah did not deem fit to give any position to women. It is clear from above that neither in the past (Bab, Bahaullah) nor in the present (UHJ), were women considered equal to men.
There is no doubt that advancing the status of women is a proposition which is appeal to all. However while the concept is being trumpeted by the Baha’is, it is more important to see how far that is implemented in spirit and in practice. For the Baha’i Faith, it appears that the concept is being advanced merely to attract more women and consequently, the next generation to their fold.