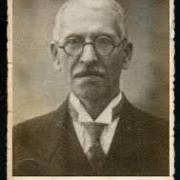 Muhammad bin Abdul-Vahhab Qazvini, arrived in Paris from Clarens, Switzerland, on 6 October 1911 and immediately got such a severe cold that for a week I stayed home. During this period I did not leave my dwelling and remained unaware of news of the world! One day Aqa Seyed Muhammad Shaykhul-Islam Gilani, who was the brother-in-law of the late Mirza Karim Rashti and his brother (the late Sardar Muhiy) visited me at my house. In the course of conversation he asked: “Do you know that Abbas Effendi, the head of Bahais, is now in Paris?” With astonishment I replied that I was unaware.  "Yes, he has been in Paris for about twelve days." he continued; "his house is near Quai de Passy, among the well-known neighborhoods of Paris."

I immediately wrote to Dr. Muhammad Khan Mahallati, one of my old Bahai friends in Paris, and asked him to arrange, if possible, for me to visit Abbas Effendi. I inquired whether it was necessary to request permission for me, thinking that, like Acre, here, too, one should appeal to an intermediary to contact the chief, and a meeting would be possible only after receiving the proper permission!

At noon time, the next day, Saturday, 14 October 1911, Muhammad Khan came and told me that intermediary, request, or permissions is not needed. We agreed that he would return the next morning at 9:00 so that we could go to Abdul-Baha’s residence.

The next morning (Sunday, 15 October 1911) Dr.Muhammad Khan came to my house, and by the underground rail (metro), we went to Abdul-Baha’s house at 4, rue de Camoens. His residence was at an exquisite building, newly constructed, and furnished with all the latest means of comfort, such as elevator, electricity, carpeting in the stairway, telephone, and so on. It was a large apartment with six or seven rooms, and perhaps even more, two formal sitting rooms, and superb furnishings. Once we entered the hallway of the apartment, I noted that separate groups of two or three were conversing with one another and were not concerned with the visitors. I quickly thought that it was similar to the Rawzeh-khani gatherings in Iran, where no one pays attention to others, and such formalities as invitation, calling ahead of time, presenting one's personal card, or requesting permission to enter, and so on were not required.

My friend became engaged in talking with one of the groups standing in the hall and was nearly out of my sight. For about six minutes I stood there not knowing what to do! Then I suddenly saw one of my acquaintances from the last year visit to Paris, titled Tamaddunul-Mulk, who was a young man from Shiraz and a fanatic Baha'i, and went to him, and we shook hands. When I asked about attaining Abdul-Baha’s presence, he said, "He is in the next formal room; if you please, let us go there." With this he picked up a chair and went to the drawing room and after about half a minute returned and invited me to go with him.

When I entered the room, my eyes fell on Abdul-Baha, whom I immediately knew, as I had seen his picture many times in various papers and certain books, and my eye was acquainted with his face. He wore a small head dress, simply a white piece of cloth wrapped around a small white fez, and a large brownish Arabic cloth with wide sleeves. His beard and eye brows were white as cotton, and he possessed brilliant, piercing eyes that resembled those of Tolstoy. He was sitting on a velvet-covered chair at the head of the room with his back to the window. All around the room -there were actually two connecting rooms, a larger one where he was at that time and a smaller one- were sitting absolutely silent and motionless some thirty-five people, mostly women, from Iran, Egypt, America, England, France, and so on. Not one noise could be heard or felt from anyone, particularly the Persians who were wearing their customary hats and who, with arms folded on the breast, remained still and upright like statues. Each sat with downcast eyes; truly one could mistake them for statues, as they were all extremely quiet, immobile, and reverently still.

Quietly, I entered the room, offered my greetings, and wanted to sit by the entrance. But Abbas Effendi rose from his seat and greeted me warmly, bidding me to move up by saying, "Higher please, higher please!" I went a bit further and was about to sit when again he said, “Higher please. Come sit here. "He pointed to a chair on his own right hand side. Since I did not wish him to remain standing, I quickly took my seat next to him on the chair that he had designated. For the next two or three minutes he continued to greet me and inquired about my wellbeing, though, unfortunately, I do not recall his exact words. He added, "I asked of you and was told that you were not in Paris."

I was a bit bewildered about how it was that he knew me and what had prompted him to inquire about me? The thought then came to my mind that perhaps this was a ploy to add me to his well-wishers. My reasoning was that I knew Mr. Dreyfus was fully aware of my publishing the book Nugtatul-Kaf, having edited its Persian text, and having prepared an introduction based on the English introduction of the late Edward Browne and some other of his writings. Therefore, as soon as I requested an audience, he must have told Abdul-Baha: "This person who is now seeking an audience is the same publisher of the infamous Nuqtatul-Kaf, and to attract his heart, when he comes, do not mention any of this business!" It seems that Dreyfus did not wish to be present in the room when I entered; and must have momentarily exited from another door but came in after my entrance and with his eyes greeted me, pretending to have just come into the room!

Abdul-Baha quickly turned to him (Dreyfus), and it was evident that he was engaged in presenting a talk-that is, Abdul-Baha in Persian would give his speech consisting of teachings, and the others were listening most attentively. Dreyfus would translate from Persian into French. However, Dreyfus said, "I am shy to translate in the presence of our old and very learned friend, Mirza Muhammad." Abdul-Baha turned to me and said, "We were discussing a subject with the friends; after our talk we shall visit with you extensively. If you wish, translate for them that 'The children of Israel had sunk into the depth of darkness..." I replied that, since I had just arrived and was uninformed of the details, it was better if Mr. Dreyfus continued translating.

Abbas Effendi continued his talk and spoke each sentence in eloquent Persian slowly. Dreyfus would translate it into French. In most instances, the translation was far from the original, and we can say that his translation had nothing to do with the sentence originally spoken by Abbas Effendi.

Anyway, from the point that I entered the gathering, the subject of Abdul-Baha’s talk was that the children of Israel had sunk into the abyss of darkness, were constantly at war and battling with each other, and worshiped gods. Hence God sent Moses to guide them, and he was able to lead them to the path of faith. After the passage of many centuries, because of the material attachment of the divines of Israel, the religion of Moses decayed and was corrupted and became the source of profit for the rabbis. Therefore, God sent forth Jesus, the Spirit of God, who gave his life for this mission ... and similarly, the Prophet Muhammad, and then, in his view, Ali Muḥammad Bab, Bahaullah, and now he himself, and so on.

After concluding his talk, Abdul-Baha took my hand and led me to the smaller room next to the larger one, where we conversed on a variety of topics not related to religion. I asked him several questions about the Ismailis (as during that time I was publishing the third volume of Jahan-gusha – e -Juvayni, which was concerned with the Ismailis), particularly about the present Ismailis in Shamat (Syria)."He responded accurately.

I then asked him a few questions about the Azalis. He immediately frowned, always referring to them as Yahya'is and never calling them Azali.

I further asked, "It is said in Iran that according to your instructions, the remains of the Bab have been moved from the vicinity of Tehran to the mountain of Carmel, Haifa, and are now buried there. Is this true?"

Clearly and explicitly he stated: “Yes, in such a year (and now I cannot recall the exact year that he mentioned), I accomplished this matter."15

After discussing various topics, he kept me for lunch, which among other things, included a delicious broth (Abgusht) that contained excellent peas-a very rare item in Paris. On several more occasions, in his residence or in the house of Dreyfus (and his wife, Mrs. Dreyfus-Barney), I had lunch or dinner with Abbas Effendi until he left Paris.

During the same time that I met Abdul-Baha in Paris, his honor Seyed Hasan Taqizadeh, the former ambassador of Iran in London, was also in Paris. He, too, went to meet him and was received with the utmost respect and honor. Now in Tehran I asked him to write whatever he may recall of that meeting to be included in the Yadgar journal. He, with his customary alacrity to assist such worthy and scholarly causes, has accepted my request and prepared the following section, which appears exactly as he wrote it.