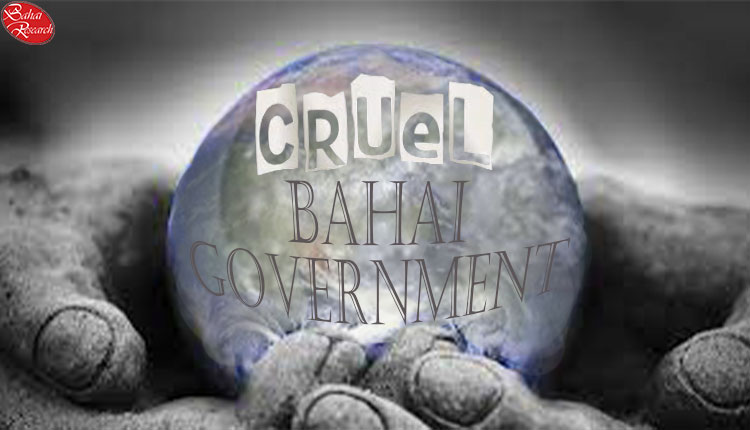 The Baha’i Government would be Totally Tyrannical

The Baha’i Administrative Order, developed by Shoghi Effendi, and derived from the writings of Baha’u’llah and ‘Abdu’l-Baha, is a badly flawed and ineffective model of government, which would naturally take over an area if the Baha’is ever became the majority of any place on Earth. Here’s why that must NEVER happen:

First, Baha’i elections are run in such a way that there are no nominations; campaigning is forbidden; and the top nine members that get more votes are elected. As a result, incumbents are virtually guaranteed to win, turnover is extremely low, and the policies of administrative bodies cannot be challenged by outsiders at elections. There is no freedom in such elections.

Second, consider this quote from Baha’u’llah himself:

“Consider the pettiness of men’s minds. They ask for that which injure them, and cast away the thing that profits them. They are, indeed, of those that are far astray. We find some men desiring liberty, and priding themselves therein. Such men are in the depths of ignorance.

Liberty must, at the end, lead to sedition, whose flames none can quench. Thus, warn you he who is the Reckoner, the All-Knowing! Know you that the embodiment of liberty and its symbol is the animal. That which behemoth man is submission unto such restraints as will protect him from his own ignorance, and guard him against the harm of the mischief-maker. Liberty causes man to overstep the bounds of propriety, and to infringe on the dignity of his station. It debases him to the level of extreme depravity and wickedness.

Regard men as a flock of sheep that need a shepherd for their protection. This, verily, is the truth, the certain truth. We approve of liberty in certain circumstances, and refuse to sanction it in others. We, verily, are the All-Knowing!

Say: True liberty consists in man’s submission unto my commandments, little as you know it. Were men to observe that which we have sent down unto them from the heaven of Revelation, they would, of a certainty, attain unto perfect liberty. Happy is the man that has apprehended the Purpose of God in whatever He has revealed from the Heaven of His Will that pervades all created things. Say: The liberty that profits you is to be found nowhere except in complete servitude unto me, the Eternal Truth. Whoso has tasted of its sweetness will refuse to barter it for all the dominion of earth and heaven.” (Kitab al-Aqdas, p. 63 paragraph 122-125)

I think George Orwell would call this sort of thing “doublespeak”. Of course, if you are a Libertarian, this is total nonsense to you. War is peace, freedom is slavery, and ignorance is strength. NOT!

Third, Baha’ullah himself made many laws in his writings that for Baha’is can never be challenged or overturned, not even by Baha’i administration bodies. Even worse, the interpretation of those laws by ‘Abdu’l-Baha and Shoghi Effendi also cannot be challenged or overturned. The legislative functions of those bodies, including the Universal House of Justice, are thus extremely limited. Baha’is have NO real freedom!

I used to be a member of the Baha’i Faith, and thought it has some good points, but it ultimately fails to pass the test of independent investigation. Baha’is usually seek an image as being very liberal and open-minded, to attract seekers. Once within the community however, you are very limited in terms of how you should feel about any aspect of life… it has to be the “Baha’i Way” or no way! In fact, you may find yourself in a ridiculous situation if you have unique family situations…

Are you adopted? Oh, too bad if you were wanting to get married…. Better hope you can track down your biological parents, or you will face a real nightmare, because you need their permission before you can marry if they are still living! If they, let’s say, don’t like “negroes” and you want to marry interracially, then despite the fact that they have never seen you before in their lives (because they dumped you at an orphanage) you are forbidden to marry, and face severe penalties if you do so anyways. Have you, or anyone you know, had an experience where you faced a fourfold conflict with: the love of your life, a biological parent you’ve never met (or a hard-headed parent with prejudices against your love’s race), the Baha’i religious administration, and your own conscience.

Nowhere does the injustice and absurdity of Baha’i law become more obvious than on the issue of marriage and trans-genders. This statement from Shoghi Effendi is truly moronic:

“No matter how devoted and fine the love may be between people, to let it find expression in love acts is wrong. To say that it is ideal is no excuse if is really forbidden by Baha’u’llah…”

There is not a shred of evidence for the assertion in the last sentence. Yet, as a Baha’i, one must accept that claim as absolute truth and ignore the evidence that suggests otherwise. Why? Simply because Shoghi Effendi, the Guardian of the Baha’i Faith, was said to be infallible! The Universal House of Justice (UHJ) says about the same issue: [3]

“The Universal House of Justice is authorized to change or repeal its own legislation as conditions change, thus providing Baha’i law with an essential element of flexibility, but it cannot abrogate or change any of the laws which are explicitly laid down in the sacred Texts. It follows, then that the House of Justice has no authority to change this clear teaching.”

Then why bother to have a Universal House of Justice at all? It is toothless!

Again, no evidence, just assertions. The fact that there is a community in the face of overwhelming opposition from conservative religious and political forces means that we must reject the Baha’i assumptions in the name of true justice. More doublespeak. No thanks, we need better honesty than that.

We need to free ourselves from this sort of dogmatic extremism, not allow ourselves to be led into it once more by idealistic seduction!

The No. 18 issue of Baha’i Shenasy (Baha’i Research) was resealed