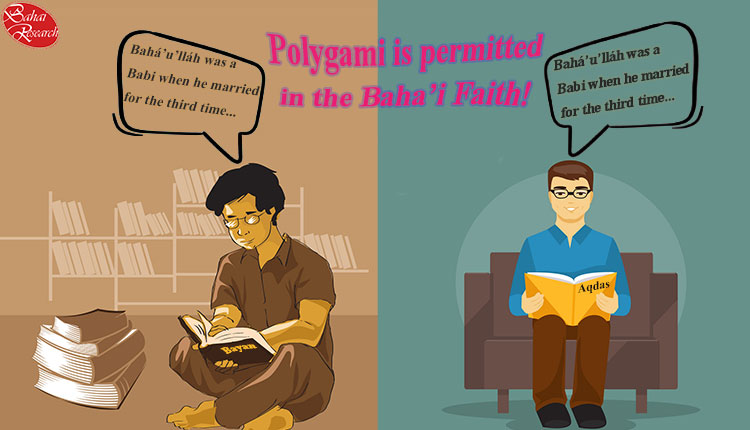 I know you are reading this and telling yourself that Baha’ullah had 3 wives because when he got married he was a Muslim, and Muslims can have 4 wives! But this is wrong!

When Baha’ullah married his second wife, he was a Babi! He accepted Bab in 1844, so he was not a Muslim anymore!! He was a Babi! And in Babi religion you can only have 2 wives.

In the Persian Bayan, wahid 8 section 14, the Bab says:

“If a man or woman proves incapable of having a child, it is legitimate for the spouse who is not infertile (whichever it may be) to marry again after having obtained the permission of the other party, but not without her permission.”

But Bahaullah had 7 children from his first wife!

But who cares whether Aqdas was “revealed” to him or not! He was a Babi and he could not have had more than two wives! (See below! Even in Aqdas Bahaullah said you can have two wives!) Also, did you notice that they did not mention that Bahaullah was a Babi and not a Muslim? When he was in Baghdad he was a Babi!

And, aren’t we told that the divine messengers live exemplary, holy lives and are obedient to the holy texts even *before* they receive their Revelations???

If it is “impossible to be just to two or more women in marriage” as Abdu’l-Baha said, how would this state of affairs be any different before Baha’u’llah wrote the Aqdas?

Baha’u’llah also said: “God hath prescribed matrimony unto you. Beware that ye take not unto yourselves more wives than two.”(Baha’u’llah, The Kitab-i-Aqdas, p. 41)

Although in the next sentence he said monogamy is accepted “Whoso contenteth himself with a single partner from among the maidservants of God, both he and she shall live in tranquillity.” (Baha’u’llah, The Kitab-i-Aqdas, p. 41)

Shoghi Effendi said: “He made plurality of wives conditional upon justice.”

But first, we must acknowledge that nowhere in the Aqdas is polygamy preconditioned upon justice (or the equal treatment of both wives). This is an addition by Abdu’l-Baha. Perhaps Baha’u’llah told Abdu’l-Baha orally about this, but to my knowledge there is no written document authored by Baha’u’llah laying out this precondition.

Second, according to the Writings of Abdu’l-Baha, he did not say that the precondition of justice cannot be met. In fact, He says the opposite:

“Concerning the practice of bigamy, this has been promulgated, and no one must abrogate it. ‘Abdu’l-Baha has not abrogated this law. These are false accusations and lies (spread by) the friends. What I have said is that He has made bigamy bound on a precondition. As long as someone does not attain certitude regarding the capability to practice justice and his heart is not at rest that he can practice justice, he should not be intent upon a second marriage. But if he should be sure and attain certitude that he would practice justice on all levels (and conditions), then a second marriage is lawful. Just as has been the case in the Holy Land: the Baha’i friends wished to marry a second wife, accepting this precondition, and this servant [Abdu’l-Baha] never abstained (from giving permission), but insisted that justice should be considered, and justice actually means here self-restraint; but they said, that they will practice justice and wished to marry a second wife. Such false accusations [charges that Abdu’l-Baha prohibited bigamy] are the slanderous whisperings of those who wish to spread doubts and to what degree they already succeed in making matters ambiguous! (Our) purpose was to state that bigamy without justice is not lawful and that justice is very difficult (to achieve).” (Amr wa Khalq, Vol 4, p. 174)

“You asked about polygamy. According to the text of the Divine Book the right of having two wives is lawful and legal. This was never prohibited, but it is legitimate and allowed. You should therefore not be unhappy, but take justice into your consideration so that you may be as just as possible. What has been said was that since justice is very difficult (to achieve), therefore tranquillity (calls for) one wife. But in your case, you should not be unhappy.” (ibid, Volume 4, p. 174)

It is obvious from reading the above that Fazel Mazandarani as a Baha’i missionary forgot that Bahaullah never allowed his follower interpret Holy context including Aqdas. Unless, we accept revelation continued among the Baha’is and missionaries!! While there is no convincing document of Abdul-Baha about the precondition of justice!!

Now, it is equivocal that Baha’is do polygamy (according Bahaullah’s life) or billboard the Aqdas statement in their life!!

The Conference of the Continental Boards of Counselors