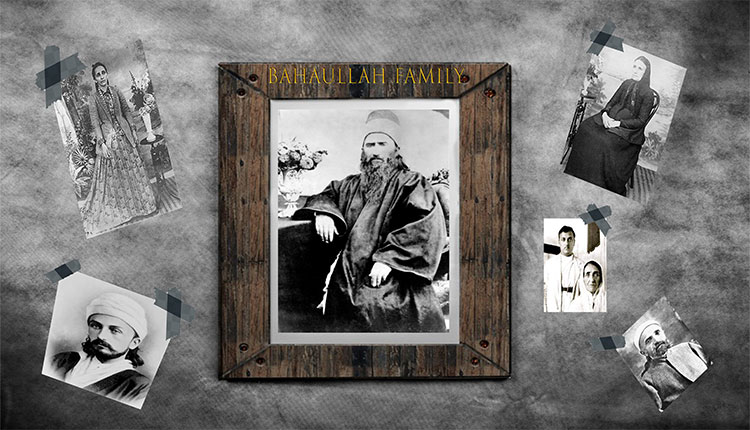 Below is the Detail of the Family Members of Baha’u’llah. Interesting to note that many members of Bahaullah’s family were Ex-Communicated by Abdul-Baha and Shoghi Effendi.

Mirza Husayn Ali Commonly called “Baha” or “Baha’u’llah” was the founder and prophet of the Bahá’í Faith. He was born in 1817 to Khadíjih Khánum and MírzáBuzurg of Nur (in the province of Mazandaran), a Persian man, and went on to be a follower of Islam than follower in the Bábí movement/Faith, and then established the Bahá’í Faith in 1863.

Asiya is stated to have been surnamed the mother of the Universe. This is denied by the followers of Mirza Muhammad Ali and dismissed as devoid of historical foundation.

To his first wife (Asiya) he gave the title Nawwaba, because she was the daughter of Nawwab of Tehran (Avareh, Al‐Kawakib‐al‐Durriyya by Awara, vol. 2, p. 4, Materials, p. 62).

Ásíyih was “Bahá’u’llá h”’s first and best‐known wife. She was a daughter of a nobleman, Mirza Isma’il‐i‐Vazir. Her date of birth is not known. They married sometime between 24 September and 22 October, 1835 in Tehran and she had seven of “Bahá’u’lláh”’s children, of whom only three made to adulthood. She was given the title Navváb by which she is best known within Bahá’í circles. She died in 1886 in `Akká.

Navváb bore at least three other children, but due to their early deaths little is known about them

Born in 1844 and died 1921 He was the oldest child of Ásíyih and Bahá’u’ll á h. He was variously referred to by Bahá’u’lláh as “Mystery of God”, “The Master”, “Perfect Exemplar” and “the Greatest Branch”. “Abdu’l‐Bahá” went on to be the Centre of the Covenant of the Bahá’í Faith after the death of His father.

During this time, he bore attacks from his half‐brother Muhammad `Alí, who was not given a leadership role or authority by “Bahá’u’lláh”. Muhammad `Alí claimed that “Abdu’l‐Bahá” was taking on too much authority; Bahá’ís refute this claim by citing “Bahá’u’lláh”’s Lawh‐i‐Ghusn (Tablet of the Branch) (National Spiritual Assembly of the Bahá’ís of the United States (ed.) (1943-1976). Bahá’í World Faith: Selected Wri tings of Báha’u’lláh and Abdu’l‐Bahá, pp. 204‐207), Kitáb‐i‐Ahd (The Book of the Covenant) (Bahá’u’lláh [1873‐92] (1994). Tablets of Bahá’u’lláh Revealed After the Kitáb‐i‐Aqdas, pp. 219‐223), and the Kitáb‐i‐Aqdas (The Most Holy Book) (Bahá’u’lláh [1873] (1992). The Kitáb‐i‐Aqdas: The Most Holy Book, para. 121) as clear appointments of “Abdu’l‐Bahá” as his sole successor and interpreter of his writings. The struggle led to increasingly deteriorating prison conditions until “Abdu’l‐Bahá” was released after the Turkish Revolution.

During Bahá’u’lláh’s lifetime, he referred to his eldest son, Abbás, by terms such as “Sirru’lláh” (Mystery of God), or “Sarkár‐i‐Áqá” (the Master). After the passing of “Bahá’u’lláh”, he chose the title “Abdu’l‐Bahá” (Servant of Bahá).

She died a spinster.

Born in 1846 she was called Bahíyyih Khánum and entitled the Greatest holy Leaf. She was particularly dear to her father and is seen within the Bahá’í Faith as one of the greatest women to have lived:

“Verily, we have elevated thee to the rank of one of the most distinguished among thy sex, and granted thee, in My court, a station such as none other woman hath surpassed.” (Baha’u’llah, quoted in The Bahá’í World, vol. 4, p.171)

She stood by and remained faithful to the Centers of the Covenant over years of infighting within the “Bahá’u’lláh”’s family that led to the expelling of many of them. Shoghi Effendi in particular felt her support during difficult times such as the passing of “Abdu’l‐Bahá”, and in the years afterwards when she was entrusted with the Faith when he was absent from the Bahá’í World Center in Haifa.

She died on 15 July 1932 was buried in the Bahá’í gardens below the Bahá’í Arc on Mount Carmel not far from her two brothers and mother. The shock to the administration meant that religious festivals were suspended for nine months.

The death is significant as Bahá’ís believe that “Bahá’u’lláh” offered him the chance of being cured, however he chose to use his life as a sacrifice so that the prison gates would open and the pilgrims would be able to visit “Bahá’u’lláh” in prison. It reflected one of the toughest times for them, but restrictions on them did lift in the years to come with them eventually being allowed to live a short distance outside the prison city.

Mírzá Mihdí was eventually buried alongside his mother in the gardens below the Bahá’í Arc on Mount Carmel in Haifa near his brother and sister.

Fatima surnamed the Supreme Cradle (Mahd‐i‐Ulya) born in 1828 and generally known as Mahd‐i‐’Ulya, Fatimih was one of “Bahá’u’lláh”’s first cousins, and later become his second wife. They married in 1849 in Tehran and she had six of Bahá’u’lláh’s children, of whom only four survived to adulthood. She was said to have harbored great enmity towards “Abdu’l‐Bahá”. She died in 1904, BiBi Fatima and her four children were excommunicated by “Abbas Effendi”. To his second wife (BiBi Fatima) he gave the title ‘The Supreme Cradle’ [a title reserved for the Queen‐Mother in Iran, T.A p. 361] (al‐Kawakib, ibid, p.8; Materials, p.63)

Born in Baghdad in approximately 1852, his father called him the “Greater Branch”. When “Bahá’u’lláh” declared “Abdu’l‐Bahá” his successor, he set that Muhammad `Alí was next in rank after him. (Bahá’u’lláh [1873‐92] (1994). Tablets of Bahá’u’lláh Revealed After the Kitáb‐i‐Aqdas, p. 221). When “Abdu’l‐Bahá” died, his Will went into great detail about how Muhammad `Alí had been unfaithful to the Covenant, labelling him a Covenant‐breaker (`Abdu’l‐Bahá [1901‐08] (1992). The Will and Testament of ‘Abdu’l‐Bahá, p. 5), and appointing Shoghi Effendi his successor instead.

She was born at Baghdad. Married Majdu’d‐Din (son of “Bahá’u’lláh”’s faithful brother Aqay‐i‐Kalim also known as Mirzá Musa), who was one of “Abdu’l‐Bahá”’s greatest critics. Both were eventually declared Covenant‐breakers. She died at age 49 in 1904/5 and her husband died at over one‐hundred years of age in 1955.

Relatively little is known about Díyá’u’lláh (Ziyaullah), so it is difficult to piece together an accurate account of his life, but we do know:

Gawhar was “Bahá’u’lláh”’s third wife. They are said to have married in Baghdad

sometime before he declared his mission. When “Bahá’u’lláh” left Baghdad in

Kashani. Later, on her way to join “Bahá’u’lláh” and the family she is reported to

have been taken captive along with other believers, and for some years she was

among the Bahá’í refugees in Mosul. She later went to Akká at “Bahá’u’lláh”’s

instruction. (Letter from Universal House of Justice: 1998, Apr 06, Memorandum re Wives of Bahá’u’lláh)

her. (Juan Cole. A Brief Biography of Baha’u’llah)

Both mother and daughter were declared Covenant‐breakers by Mirza Abbas Effendi after the death of “Bahá’u’lláh”. Gawhar died during the ministry of “Abdu’l‐Bahá”, thus between 1892 and 1921.

13 to 15 were surnamed Rabbani. Mirza Hadi Afnan and their children (14‐17) were excommunicated by Shoghi Effendi (13), on whom the title of Effendi was conferred by Mirza Abbas Effendi.

Muhsin Afnan, Tuba and their children were excommunicated by Shoghi Effendi.

Jalal Shahid, Ruha and their children were excommunicated by Shoghi Effendi.

Ahmad Yazdi and Munawwar were excommunicated by Shoghi Effendi.

Mirza Muhammad Ali, his wives and children were excommunicated by Abbas Effendi.

Ziyaullah and his wife were excommunicated by Abbas Effendi

Badiullah, Aliya and their children were excommunicated by Abbas Effendi. Baha’s full brother Musa surnamed Kalim (Interlocutor) because he talked with god, “Baha”.

Here, in a table is illustrated all the relationship of Bahaullah’s family. 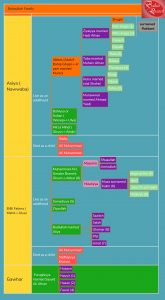 1.One of “Bahá’u’lláh”’s titles is Sadratu’l‐Muntahá, which translates from Arabic

as the tree beyond which there is no passing. In this connection, “Bahá’u’lláh”

entitled his descendants as follows:

His male descendants were given the title of Aghsán (Arabic for “Branches”) which in singular form is “Ghusn”. In particular, three of his sons were given specific “branch” titles

His daughters were given the title of Afnán (translated from Arabic as “Leaves”). This title should not be confused with the Afnán title given by “Bahá’u’lláh” to the maternal relatives of the “Báb”, which is translated as “twigs”, and was adopted by their descendants as a surname. Thus “Bahá’u’lláh”’s eldest daughter, Bahíyyih (given name, Fatimih), was given the title of the Greatest Holy Leaf.

2.Ghusn‐i‐A‘ẓam and Ghusn‐i‐Akbar can both be translated as “the great branch, “The greater branch” or “the greatest branch”. A‘ẓam carries a higher status in Arabic, so Bahá’í authors and others translate `Abdu’l‐Bahá’s title as “Most Great” and Muhammad `Alí’s title as “Greater” (Taherzadeh, 2000, p. 256).