The Ups and Downs 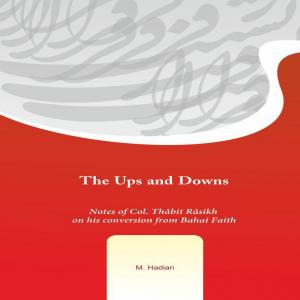 Mr.Yadullah Sabet Rasekh was born in 1911. His father, Mirza Muhammad Khan Faridani (Nayeb), a governmental staff, was influenced by the publicity of a Bahai teacher, Sadr al-ulama, and converted to the Bahai faith. So his children became Bahai either.

Yadullah was so firm in his Bahai faith that went from time to time to the meetings of the Muslim clergies, and had controversial discussion with them.

He joined army when he was a young man. Since he had some legal studies, so was appointed in the military court.

The major Sabet Rasekh became informed about the approach proposed by the “Hands of the Cause”, and the claim of Charles Mason Remey, as being appointed by Shoghi Effendi, during his life. He was net convinced by the decision of the “Iranian Hands of the Cause”. So, he accepted  Mason Ramey as the 2nd guardian.

The criticizes and comments of the Muslim writers about the Bahai faith, as a whole, which included both Haifan Bahais, and  the Orthodox Bahais attracted his attention. His talks and discussions with some of the well aware Muslims, led him to find the truth, and he converted to Islam in 1967.
Till the end of his life, Mr.Sabet Rasekh tried to share his religious findings with other people, especially the followers of the Bahai faith. But the Bahai administration prevented his connections and communications with other Bahais. He prepared some texts and documentary letters about the undesirable and hidden truths of the Bahai faith. The current book, titled by Mr.Sabet Rasekh, as” Ups and Downs”, is the collection of most of those works. The subjects of the book may be classified in 4 parts:

1.The differences between Bab and the Mahdi of Islam;

2.Some of the inner contradictions and discrepancies in teachings and texts of the Bahai faith that led him to leave the faith and the Bahai community.

3.His protests about the control and administration of the Bahai international community, by the Hands of the Cause, after the death of Shoghi Effendi.

4.The last  part of the book includes the serious and revealing protests of Mr.Sabet Rasekh about the division of the Shoghi’s inheritance, and some unlawful acts of the Bahai authorities in order to possess the Shoghi’s properties after his demise.

5.The retired Major Sabet Rasekh died in 2001, and was buried in his parental village, Dehagh, in Faridan town, near Isfahan.