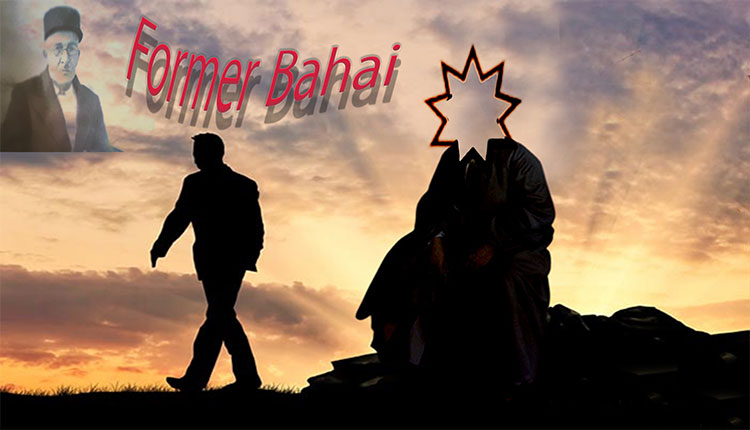 Abdul-Hossain Ayati (1871—1953) was a Persian Shia cleric, [1] notable poet, [2] Iranian Orator, [3] “outstanding author” [4] [5] and “prominent historian”.[6] He converted to the  Baha’i Faith at the age of 30 and 18 years later converted back to Islam, and authored a number of books on different subjects such as literature, history, poetry, Quran and Arabic. He also wrote a number of polemic works against the Baha’i Faith. He was known among Baha’i circles as Avarih.

Pic 1. Abdul-Hossain Ayati as a cleric (right) and as a Baha’i (left)

Ayati was born in a religious family in the city of Taft in the province of Yazd (Iran) in 1871. His father was a scholar by the name of Haji Akhund Mujtahid Tafti. Ayati received a religious education from childhood.[1][2] His first teacher was his father. At the age of 15 he moved to Yazd where he studied at the Khan religious school for two years in Islamic subjects. He then moved to Iraq to study at the seminaries in Najaf and Karbala where he became a student of Ayatollah Mirza Hasan Shirazi. This only lasted for a few months and he was forced to return to Yazd after receiving the news of the death of his father.[4]

Ayati became a cleric in his youth years while at Yazd and would give sermons and lead the prayers. He showed great interest in literature and poetry since those times.[1][2] According to one of his brief autobiographies, he hadn’t reached puberty yet when he was allowed to wear the classic Muslim cleric clothing and give sermons. His father was his mentor who encouraged him to pursue his gift in poetry and bestowed him with the poetic name of Ziaiee. At the age of twenty, he lost his father and at the age of twenty-five, he was stationed as the Imam of the Mosque that his late father led the prayers at.[3]

He became familiar with the Baha’i Faith after his father passed away and became a Baha’i at the age of 30.[1][2] This is how Ayati describes the manner that he became a Baha’i and left his birth city:

“I became familiar with the Baha’i s at the age of 30 and left my beloved homeland. I removed the Turban from my head and shaved my beard and started traveling around the world.” [4]

Leaving Iran and life as a Baha’i

After becoming a Baha’i, Ayati started a career as a Baha’i missionary that saw him traveling to Tehran, the Iranian capital and from there to many Iranian cities and provinces.[4] His Missionary travels then took him outside of Iran and in a span of 18 years (during the lifetime of Abdul-Baha) he traveled to Turkestan, the Caucasus, the Ottoman Empire, and Egypt. Due to his numerous endeavors Abdul-Baha gave him the titles of “Raʾīs al-Moballeḡīn” (Chief of Missionaries) and “Avarih” (Wanderer).[7]

In 1923, Shoghi Effendi sent Avarih to England to teach the Baha’i Faith. This was first announced to the Baha’is of the west through the Baha’i Magazine, Star of the West.[8] In a letter addressed to the Baha’is in Britain Shoghi describes Ayati and his book al-Kawakib al-durriya in this manner:

“Ere long, an able and experienced teacher recently arrived from Persia will visit your shores, and will, I trust, by his thorough knowledge of the Cause, his wide experience, his fluency, his ardor, and his devotion, reanimate every drooping spirit, and inspire the active worker to make fresh and determined efforts for the deepening as well as the spreading of the movement, in those regions. His forthcoming book, which he has laboriously written on the history of the Movement and which has been partly revised by the Pen of our Beloved Master, is beyond any doubt the most graphic, the most reliable and comprehensive of its kind in Bahai literature. I am sure he will considerably enrich the store of your knowledge of the various phases and stages of the Bahai Movement.”[9]

The Former member of the Universal House of Justice, Luṭfu’lláh Hakim, served as his translator during this visit.[10] Subsequent issues of Star of the West chronicled Avarih’s Journey and activities while in England according to the following Table:

Pic 3. Avarih during his Missionary Journey in England

In a letter addressed to the Baha’is of some European countries, Shoghi Effendi writes about Avarih, thus:

His wide experience and familiarity with the various aspects of the Movement, his profound and extensive knowledge of its history; his association with some of the early believers, the pioneers and martyrs of the Cause will I am sure to appeal to every one of you and will serve to acquaint you still further with the more intimate and tragic side of this remarkable Movement.[13]

After reverting to Islam he openly opposed the Baha’i Faith and was considered a Covenant-breaker. He was labelled by Shoghi Effendi as a “shameless apostate”.[14]

The references made to Avarih in John Esslemont’s book Baháʼu’lláh and the New Era were removed in subsequent editions published after Avarih’s apostasy from the Baha’i Faith.[15]

Reverting to Islam and Returning to Iran

He returned to Iran and spent the rest of his life as a secondary school teacher.[7] For the first ten years he taught literature at the Sultaniyya, Elmieh, Razi, and Dar al-Funun schools in Tehran. He was then Transferred to Yazd and continued his teaching career.[4]

Ayati passed away in the City of Yazd in 1953.[3] The cause of death was an illness that he was afflicted with during a trip to Tehran shortly before his death. His body was transferred to Qum and he was buried there.[5] Shoghi Effendi describes Avarih’s death as a strike of God’s avenging hand in the following manner:

“Following the successive blows which fell with dramatic swiftness two years ago upon the ring-leaders of the fast dwindling band of old Covenant-breakers at the World Center of the Faith, God’s avenging hand struck down in the last two months, Avarih, Fareed and Falah, within the cradle of the Faith, North America and Turkey, who demonstrated varying degrees, in the course of over thirty years, of faithlessness to Abdul-Baha. The first of the above named will be condemned by posterity as being the most shameless, vicious, relentless apostate in the annals of the Faith, who, through ceaseless vitriolic attacks in recorded voluminous writings and close alliance with its traditional enemies, assiduously schemed to blacken its name and subvert the foundations of its institutions.”[16]

Ayati’s works are mainly focused on history, literature and poetry, Islamic religious topics, and refuting Baha’is. Many of his works have not been published including a large number of his poems. According to Ayati his Persian and Arabic poems amounted to about 30,000 lines. Ten thousand of these were lost permanently in this manner:

“Ten thousand lines of my poetry were pillaged by the Baha’is. To get hold of the Baha’i books and writings that I had, they fooled my ten year old son so that these documents would not remain in my hands, and that foolish boy gave them about twenty volumes of those works in exchange for 24 Tomans, including my collection of poems.”[3]

The following is a list of his most important works in alphabetical order:

18. ”(Ayati) آیتی”. The Center for the Great Islamic Encyclopedia.

The (Lip) Service of the Baha’i Administration at the time of the Covid-19 Crises: Only for Propagation