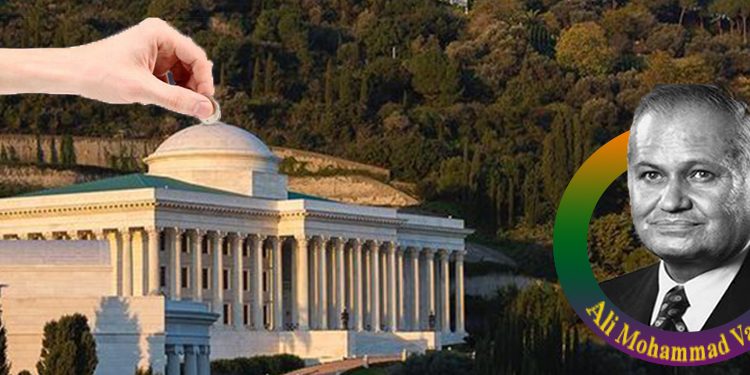 There is a great importance of Huququllah in the Bahá’í Faith.
Huququllah is an Arabic word comprised of two words. Huquq meaning “Right” and “Allah” meaning “God”. Therefore Huququllah means “Right of God”, a part of the individual’s possession and income offered at the Threshold of God. Huququllah being the Right of God and bounty for the people is clear from the Bahá’í Holy writings of sayings of The Bab, Bahaullah and Abdul-Baha.

“O people of the world, whatever ye have offered up in the way of the one true God, ye shall indeed find preserved by God, The Preserver, and Intact at Gods Holy Gate.”
Thus, the embryo of the sacred law of Huququllah was established by the Bab in the Persian Bayan, His book of Laws. Bahaullah brought some modifications in its content and fashioned it as one of the world’s shaping ordinances of His stupendous Revelation.

Bahaullah affirms “… the payment to the Right of God is conducive to prosperity, to blessing and to honor and divine protection” “As to Huququllah, this is the source of blessing and the mainspring of God’s loving kindness and tender love vouchsafed unto men.”
In Kitab-i Aqdas verse 97, it has been revealed by Bahaullah:
“Should anyone acquire one hundred mithqals of gold, nineteen mithqals thereof are Gods and to be rendered unto him, the fashioner of the earth and heaven. Take heed o people, lest you deprive yourselves of such a great bounty. This we have commanded you, though we are well able to dispense with you and with all those who are in the heavens and on earth, in it there are benefits and wisdoms beyond the ken of anyone but God, the Omniscient, the all-informed say, by this means He hath desired to purify what ye possess and to enable you to draw nigh unto such stations as none can comprehend save those whom God hath willed, He in truth is the Beneficent the Gracious, The Merciful .O people deal not faithlessly with the Right of God , nor without His leave, make free with its disposal .Thus, hath his commandments been established in the holy tablets and in this Exalted book. He who dealeth faithlessly with God shall in justice meet with faithlessness himself, He, however, who acted in accordance with Gods bidding shall receive a blessing from the heaven of the bounty of His lord, the Gracious, the Bestower, the Generous, the Ancient of Days. He verily hath willed for you that which is yet beyond your knowledge, but shall be known to you when, after this fleeting life, your souls shall soar heaven wards and the trappings of your earthly joys are folded up. Thus admonished you He in Whose possession is the Guarded Tablet.”

“O friends of Abdul Baha The Lord as a sign of his infinite bounties hath graciously favored His servants by providing for a fixed money offering (Huquq) to be dutifully presented unto Him, though him, the true One and His servants have been at all times independent of all created things, and God verily is the all possessing, exalted above the need of any gift from His creatures. This fixed money offering however caused people to become firm and steadfast and draweth Divine increase upon them.” (Will and Testament of Abdulbaha)

Abdul-Baha commenting on the manifold powers latent in the Law of Huququllah writes “…In accordance with His inscrutable wisdom and in order to apply a unique test to distinguish the friend from the stranger, He hath enjoined the Huquq upon His servants and made it obligatory.”
From all the above quotations it is amply clear that the source of energy for upholding the law of Huququllah is the individuals love and loyalty to the covenant.
As Abdul-Baha, He says that it distinguishes the friend from the stranger; this is nothing more or less than a test of ones firmness in the covenant.