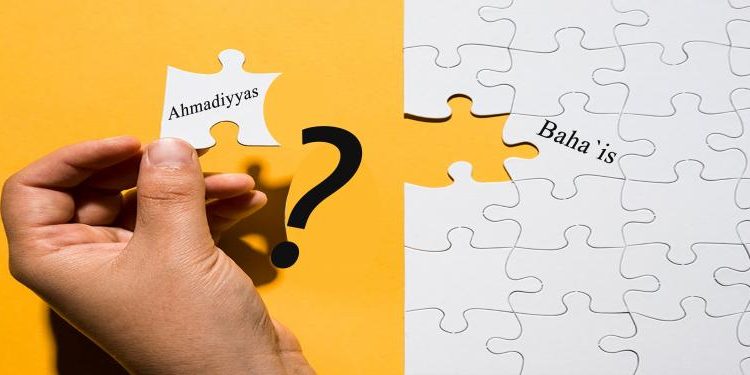 What the Ahmadiyyas have to Say regarding the Bahá’ís

What do they say for each other?
This is what the Ahmadiyyas have to say regarding the Bahá’ís:
The following important differences between the Ahmadiyya claims and the Bahá’í claims:

1. One of Hazrat Mirza Ghulam Ahmad’s basic aims was to teach the world the Islamic doctrine of the absolute oneness of God, which strongly rejects the concept that any human being can ever be a manifestation of God. The Bahá’í teachings are that there have been various manifestations of God on earth (Moses, Jesus, Muhammad, and Bahaullah). Therefore Hazrat Mirza Ghulam Ahmad was teaching the opposite of the Bahá’í beliefs.
2. As noted above, Hazrat Mirza Ghulam Ahmad proclaimed that the Islamic scripture, teachings and law are valid forever, and will never be abrogated or replaced. Again this is exactly the opposite of Bahá’í beliefs which teach that Bahaullah’s scripture and law have abrogated and replaced the Holy Quran and the Shari’ah of Islam.
3. The Prophet Muhammad taught that prophets before him had been sent by God to all nations, and he required his followers (Muslims) to believe in all of them. Moreover, he taught, as stated in the Quran, that these prophets had prophesied to their nations of the appearance of the Prophet Muhammad and had instructed their followers to believe in that Promised Prophet when he came. So the Prophet Muhammad became the converging point of the previous prophets and religions. He addressed the whole of humanity, while the previous prophets addressed only their individual nations. He was thus the Last and Final Prophet through whom all humanity is to be united.
To preach the oneness of humanity and to seek to unite religions on fundamentals in the seventh century, as the Prophet Muhammad did, at a time when no one even knew what the whole world consisted of, is a clear proof of the Prophet Muhammad getting revelation and knowledge from God. But for someone in the nineteenth century like Bahaullah to repeat similar ideas (i.e. unity of humanity) cannot be called new revelation coming from God, particularly when he himself originally arose from within the religion of Islam. (1)

These are the ideas of Bahá’ís regarding Ahmadiyya Muslims:
While some of the few quotes of their (Ahmadi) writings I have read seem quite forceful and rarely seem inspired, the correlations to Bahá’í scripture is quite astounding. Their founder also claims to be the Mahdi and Messiah, as well as claiming the same ties to Buddhism and Hinduism. They also promote non-violence and uphold jihad as personal struggle not the waring aspects Muslims have accepted widely.
They differ in many ways, they uphold more closely everything in the Qur’an and much of their writings are about this book. He also claims Jesus didn’t actually die on the cross, but rather journeyed to India where he died an old man of natural causes.
Obviously, I do not believe time based prophecies apply since it was founded in 1889, thus 45 years late for Jewish, Christian, Muslim, and Hindu prophecy at least. They also call their leader Caliph, which I agree with Riggs is the mark of the beast – the 666 referred to in Revelation. Still, it is interesting, could their leader have been exposed to Baha’u’llahs writings at this time? There are already 200 million members of this group apparently, so I think it would be a valuable group to target with pioneering, they already accept many things Baha’u’llah has said so presenting time based prophecies might be enough to bring them to the Bahá’í Faith?
I sort of liken them to Mormonism in that they have writings that correlate to what Baha’u’llah has said – and in the case of Mormonism, accurately describes the Bahá’í dispensations coming – however entirely focus on a previous dispensation rather than bringing anything new. (2)
What the Christians have to say about both of these “Mahdi’s”?

The Recantations or Declaration of Bab?!