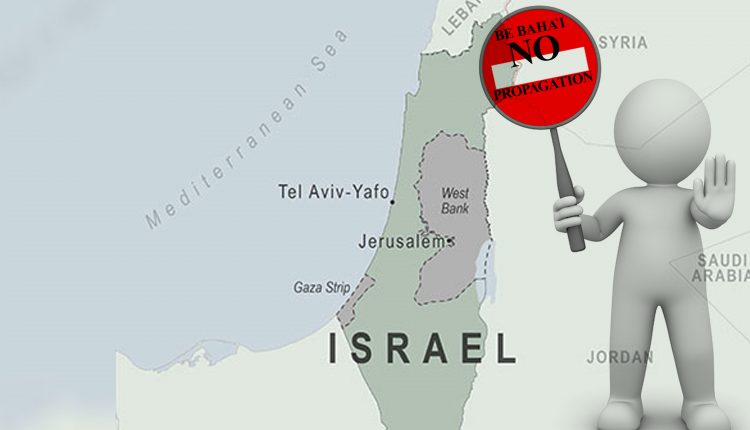 The Bahá’í administration claims there is no resident Bahá’í population in Israel. The 650-700 Bahá’ís who can be found here at any given time are all volunteers who have come from some 85 countries to do service for periods ranging from a few months to a few years. The Bahá’ís who live here as tourists or temporary residents do not engage in any form of missionary activity. Some people erroneously believe that this is in accordance with the country’s anti-missionary laws, but in fact it is a self-imposed Bahá’í prohibition against seeking or accepting new believers into the Bahá’í Faith in the Holy Land that dates back to the time when the country was still under Ottoman rule. No one knows why. It is one of several inexplicable Bahá’í regulations.

It is a well-known fact that according to a letter of Universal House of Justice the Bahá’í s are not supposed to teach and convert the Jew population in Israel. In fact, if a Jew outside Israel wants to accept Bahá’í Faith and settle in Israel, then his declaration card is not to be accepted. But the world Christian encyclopedia (WCE) has something else to offer.

In the year 1990, the number of Baha’is residing in Israel were 9500. 90 received, as were visitors from the World Council of Faiths, the World Affairs Council, and Rotary International.(Bahá’í World Vol 16, p. 60)

“During the month that followed most of the governments of the world, including those responsible for the administration of significant territories and islands, had received the Statement. The presence in the Haifa/’Akka area of the World Centre of the Faith made it possible for two members of the Universal House of Justice to join officers of the Baha’i International Community in calling on Mr. Chaim Herzog, President of Israel for the presentation that took place on 4 December. By Ridvan 1986 a total of 138 such presentations had occurred. Of these, 62 had been made in meetings between Baha’i delegations and the responsible Head of State, 42 through meetings with representatives of a Head of State, and 21 through the United Nations missions of the countries concerned through the intermediary of the Baha’i International Community. Through force of circumstance 13 were dispatched by mail.” (Bahá’í World Vol 16, p. 335)

The Bahá’í should know that: “sovereign remedy” lies in turning and submitting to the “skilled,” the “allpowerful,” and “inspired Physician. This, verily, is the truth, and all else naught but error.” (World Order of Baha’u’llah, pp. 39-40)

Had the UHJ being a true UHJ as prophesized by Baha’u’llah it would have acted on the sayings of Baha’u’llah thereby attracted the multitudes to the radiance of His glorious Faith, and enable them to warm their hearts and ignite their souls with the flames of that undying Fire which “blazeth and rageth in the world of creation.”

It is apparent that the Universal House of Justice is far from what was dreamt of by Baha’u’llah. It lacks the requisite standing .authority and legitimacy. The so called House of Justice situated at Haifa, Israel is deprived of any validity.