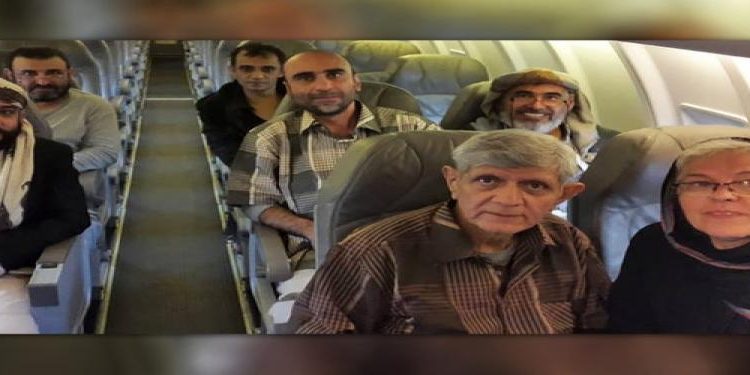 Bahais in Yemen from prison to expulsion

Shortly after their release, six Iranian teaching/administrative members of the Bahai community in Yemen were deported, in a stark example of the political climate in this war-ravaged country.

Four years of custody of the Iranian Baha’i Teaching and administrative members in Yemen’s Sanaa has ended up with deporting them. The Houthi authorities set six Baha’i members free on July 30, and they were immediately flown outside Yemen.

Haydara is the leader whom the Houthis sentenced to death last year for his links to Israel and apostasy. But Mahdi al-Mashat, head of the Houthi Supreme Political Council, in last March ordered the release of the six detainees.

Baha’ism dates back to the 19th century in Iran. The believers in this faith (Called as Baha’is) say their chief objective “is to contribute to the construction of a global order, through a universal Bahai government under the legislative, judicial, and administrative authority of Universal House of Justice established in BWC in Haifa.” The Baha’is are estimated at about1 million worldwide, and they are dispersed in several countries, including less than 100 in Yemen, who are mostly Iranian migrants.

While the Houthi government release of the Baha’i members seems like a good deed, deporting them out of Yemen points to the unpleasant atmosphere of the country toward the teaching activities and the Baha’is foreign relations. The war has starved people to death. The recent exile of the Baha’i faith members is a stark example of the insecure climate in this war-ravaged country. Many Iranian migrated Baha’is have secret teaching and organizational activities in the Arab countries, including the Saudi Arabia, indicating the un-satisfaction of the Arab states from such activities.

In the eyes of the Houthis, freeing the Baha’is is a praiseworthy step and a noble act. Hussein al-Aziz, the Houthi deputy foreign minister, said July 30 that the release of the six Baha’is came in response to the directive of Mashat. He added, “We hope that this noble stance would be met with more commitment and respect for the law and with the observance of the general order of Yemeni society.”

The release has not been applauded by everyone. Nadwa al-Dawsari, a nonresident reporter at the Middle East Institute, does not see the release of the Baha’is as a step that should be commended. She tweeted, “I hope no one celebrates the ‘release’ of Baha’is. Their release and deportation came after tremendous international pressure on Houthis.”

Presently, the Houthis are in control of the bulk of Yemen’s northern territories, and their decrees can go unopposed. The reaction of western governments and the Saudi backed Yemeni government, can do nothing to stop the limitation of the Baha’is in the country.

Though the Baha’i International Community (BIC) appreciated the release of the six members, it remains “gravely concerned.” Diane Alai, a BIC representative, said in a statement, “As Yemen’s search for durable, societal peace continues, Baha’is must be able — like all Yemenis — to practice their faith safely and freely, in keeping with the universal principles of freedom of religion or belief.”

Over the last five years, the people of Yemen, journalism and politics have been risky in Yemen, let alone teaching a different and prohibited faith. The Houthis rose to power in 2014-15.

A Sanaa-based human rights journalist told Al-Monitor on condition of anonymity that the Baha’is cannot propagate their faith freely as long as this war continues. “If they are in the south, they will be targeted by al-Qaeda operatives, and they have been limited by the Houthi state in the north.”

He added, “The Yemen government has no tolerance toward ideologies that contradict theirs. The western backed political observers have criticized the deportation of the Iranian Baha’is calling it “inhumane.” Khalil al-Omary, the Belgium-based editor-in-chief ofRai Alyemen news site, told Al-Monitor that forcing these Non-Yemeni teaching and administrative members of Bahaism –which has already been prohibited in Yemen – into exile is a “fascist act”!

While the Baha’is pretend to obey the laws and instructions of their governments; but it seems that the Baha’i persons and institutions are careless about the restrictive and prohibitive laws in the Arab countries, and continue their activities secretly.

What is the Baha’i Faith and why did it become a pariah sect in Iraq?