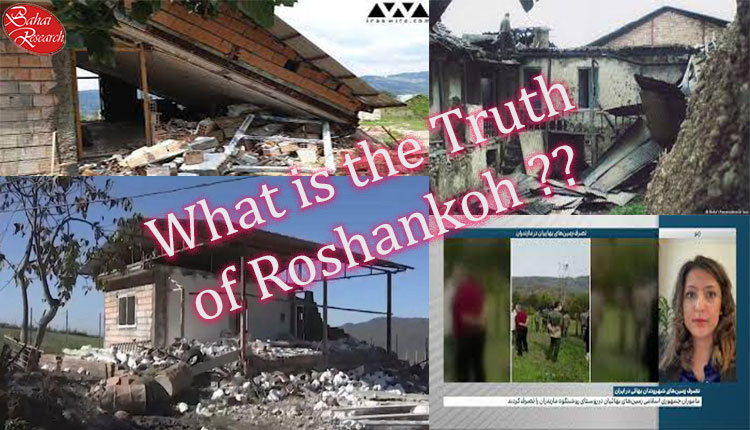 Media Frenzy; A Border on the Demolition of several Semi-Finished Buildings in Roshankoh, Mazandaran

One of the loudest events this summer was the demolition of several semi-finished buildings in the village of Roshankoh, Mazandaran, which, as usual, was covered by the BBC, Iran International, Voice of America, etc. repeatedly and continuously. From the subtitle of the breaking news to the special allocation of programs analyzing these events, it was mentioned under the false title “Demolition of Baha’i houses living in Roshankoh, Mazandaran.”

The dependence of these media on the Baha’i organizations can be proven and verified from the way they cover the news and the completely partisan content. The complete and unconditional support of the Baha’is and the presence of the spokesperson of the Baha’i organization in the programs of these networks shows the principle of impartiality of a news agency in the face of extreme prejudice. A prejudice that is recommended to leave in the Baha’i Faith. It is enough to witness the example of this matter that in less than 3 days, the oppression of Baha’is was emphasized 8 times on the Telegram channel of this media. This is despite the fact that the above-mentioned media have continuously reported news of actions that damage natural resources by individuals or legal and governmental institutions and have called the government to deal with this phenomenon.

Now, the audience of this news has the right to ask why the news media have adopted a fanatical and one-sided approach about Roshankoh Mazandaran?!

In recent years, when the issue of natural resources has been pursued in Iran, we have witnessed the destruction of illegal villas in Tehran, Lavasan, Karaj and Mazandaran many times. When among dozens and maybe hundreds of cases of illegal construction, three Baha’i offenders are present and they are supported 8 times in three days, there will be no question for the audience that what is the purpose of this news uproar? Why was the judiciary’s response to these claims never reported in the apparently neutral media, even for criticism and denial? When the editor-in-chief of the Judiciary News Agency reacted to this issue and said that the destructions were carried out with the aim of freeing national lands in a forest village and had nothing to do with the sectarian tendencies of the people.

The Chief Justice of Mazandaran also explained: “The judicial rulings issued in this case have nothing to do with sects or tendencies, and contrary to some negative media advertisements that related the execution of the rulings in this region of kiasar to the specific sects and tendencies of the people of this region, the execution of the rulings is definitive. It is done according to the law, even from this film, which was prepared for the purposes of oppressing, it is clear that it had nothing to do with the hut and the gable roof of the old house, and the semi-constructed concrete building was destroyed.”

“In addition to the seizure of national lands, 54 cases of villa construction and unauthorized construction were carried out on agricultural lands in Roshankoh village. Out of these 54 cases that were filed in the judicial courts, 9 cases were decided to be destroyed, 25 cases are being processed in the judicial courts, and 20 cases were decided in favor of the residents after presenting documents.”

Of course, it is very sad to destroy and demolish a building for which someone has worked hard and spent a lot of money, but when the necessary permits are not obtained before the start of construction, it will be a predictable event. This has happened much more to Muslims than to Baha’is, but until now, there has never been a voice from various networks, especially those networks that have turned a deaf ear to their voice and oppression for the destruction of the half-built houses of Baha’is in Roshankoh village, in condemning it. It has not been lifted. The reason is that those people had not obtained the necessary permits for construction, but there is no mention of this issue and it is related to the religious beliefs of the owners and builders.

The silence of the House of Justice and the lack of support and sympathy for the owners of these lands is another reason for the construction without permission of these people. This silence is visible next to the cry of the House of Justice with a message of sympathy for the arrest of a number of Baha’is who were detained for the reasons of negating the security of Iran.

The Baha’i organization claims that there are 300,000 Baha’is living in Iran. If we accept this unrealistic claim and consider one family unit as four people, as a result there are 75,000 houses owned by Baha’is in Iran, among which there are a large number of very luxurious and expensive housemates that were built in Iran after the Islamic Revolution. It was built or renovated in 1357, and during this period, no house was destroyed, nor was there any obstacle to the construction and renovation of houses.

Baha’is living in Iran enjoy all the basic human rights foundations similar to other Iranians at the level of society. The legal treatment of any person who commits a crime and breaking the law has nothing to do with his belief and religion.

The tumultuous support of networks outside Iran is not for defending the rights of fellow Baha’is, but with the aim of weakening the society and creating discord between the people and the government and disturbing the public mind.

Doctrines Of Baha’i Faith-The Equality of Men and Women