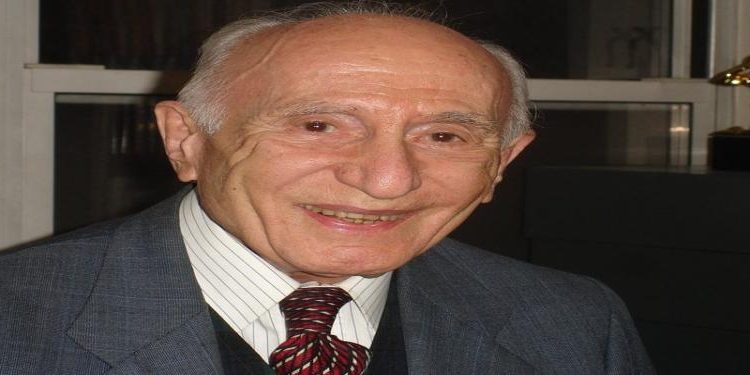 Professor Ehsan Yarshater (b. 3 April 1920 in Hamadan, Iran and died 1 September 2018 in California, USA ), the founder and editor-in-chief of the Encyclopedia Iranica, passed away. Yarshater originally hailed from a Jewish Baha’i family, part of a group of Jewish converts from that city who during the late 19th century CE and early 20th became the biggest group of non-Muslim converts to the creed.

Ehsan Yarshater was among the most eminent victims of the Baha’i leadership of the last century. During the 1930s the Baha’i patriarch, Shoghi Effendi Rabbani (d. 1957) had forbidden any Iranian Baha’i from traveling to the West, on the pain of excommunication. The reasons for Shoghi Effendi’s prohibition on Iranian Baha’is specifically remains somewhat unclear but many middle-class Baha’is of the intellectual class fell to Shoghi Effendi’s authoritarianism during this time.

In the 1930s under the Reza Shah regime, Ehsan Yarshater won himself an Iranian government-sponsored scholarship for graduate studies overseas. He used this scholarship, first alighting in Germany. But the Nazi regime (even though he was officially a Baha’i at the time, Yarshater’s Jewish Iranian pedigree) forced him out and soon to Britain, where he enrolled in the graduate program at SOAS (The School of Oriental and African Studies) studying under German orientalist Walter Bruno Henning.

When Shoghi Effendi found out that Ehsan Yarshater had defied his orders to stay in Iran and had gone to the West, he swiftly issued an excommunication against Yarshater that effectively made him what in Baha’i parlance is designated as a “Covenant Breaker” (a heretic which in Baha’i terminology is considered to be “spiritual leprosy” whereby all must shun such a person). Since his entire family were Baha’is at the time, under Baha’i beliefs (and Shoghi Effendi’s authoritarianism specifically), the entire family of Ehsan Yarshater was obliged to shun him on the pain of being shunned and excommunicated themselves. Yarshater told me in person in his NY office in 1998 that following his excommunication by Shoghi Effendi, he was prevented from visiting his family for decades and was prohibited from even attending his parent’s funeral. He was ostracized by his extended Baha’i family henceforth and the Baha’is in general for decades afterward.

Be that as it may, Ehsan Yarshater had his revenge against the Baha’i cult machinery (and Shoghi Effendi specifically) since during the years of the second Pahlavi shah, after Iraj Afshar (d. 2011), he emerged as one of the most eminent Iranists of his generation. Under the premiership of Amir Abbas Hoveyda (d.1979), during the 1960s the Iranian government of the time commissioned the Encyclopedia Iranica with Ehsan Yarshater as its editor-in-chief: a project and monument that will bear his name forever.

What could have possibly motivated Shoghi Effendi to prohibit Iranian Baha’is from traveling to the West? I’d think he would do the opposite and encourage them to go in order to help spread the Faith. This is more proof that Shoghi Effendi was insane and never should have been made a leader of the So Called Bahai Faith.

I think this prohibition may have had something to do with 1. Shoghi’s public fight with Ahmad Sohrab and the Caravan/New History Society group and 2. he did not want Iranian Baha’is mingling with Western Baha’is given that at the time the cultural image of Baha’ism in Iran and that in the West were diametrically opposed. I guess he thought that educated and articulate Iranian Baha’is like Yarshater and similar would somehow rain on his parade, as Ahmad Sohrab in fact did, hence the prohibition on pain of excommunication. But, definitely, this shows Shoghi Effendi as clearly insane and on a hyper-authoritarian power trip from hell.

Most die-hard Baha’is lived in Iran. They needed to be kept isolated from the rest of the world or else they would have contacted people who had personally met Abdul-Baha and Baha’u’llah and might have apostated after hearing about the controversies surrounding them.

That is not all. Shoghi even gave an official decree that is still effective today preventing any Arabic work of Baha’u’llah being translated to Persian. Poor souls can’t even read the book of Aqdas in their native language:

“Regarding his instruction to the N.S.A. of Iran to the effect that Bahá’u’lláh’s writings in Arabic should not be translated into Persian; this applies to the translation of the revealed words into Persian only. Your Assembly, therefore, may proceed with its plan for the rendering of the Tablet of Ahmad, the three daily obligatory prayers and other Tablets, into Urdu,” Shoghi Effendi, Dawn of a new day [Bahá’í Publishing Trust of India, n.d.], p. 85

This instruction from Shoghi Effendi is perfectly in line with what can simply be termed rules of Bahá’í translations.

To summarize rules of Bahá’í translations…

Persian and Arabic works can be translated “into Oriental languages such as Turkish and Urdu.”

Persian and Arabic works can be translated into English.

English works can be translated into non-English “European languages.”

This reminds me of when the Roman Catholic Church insisted that the Bible be locked up in Latin rather than allow it to be translated into modern languages. Attempts by people to do so were met with persecution. The Protestant Reformation put an end to such nonsense.

Did it, brother Dale? Some modern Biblical scholars argue that the Protestant Reformation went on to totally ban the Bible, especially with the King James translation, whereas the Latin Vulgate or even Slavonic versions of the Bible (even though these themselves are translations) hold deeper linguistic nuances that were totally lost as a result of the translations that came afterward. Of course Protestantism dislikes nuance in religion and wants its Revelation cut and dry. The results have not been so great.

I addressed that issue here too:

{One of the great tragedies of the Protestant Reformation, in addition to destroying forever the unity of the Christians in western Europe, was that it enshrined the Bible as the sole source of dogma among Protestants. Now, I will grant that the incredible corruption and tyranny of the Roman Catholic Church during the Middle Ages made the Reformation both necessary and inevitable, but the way it was done by most Protestants made spiritual tyranny inevitable among them as well. This was because they simply replaced the Catholic papacy and church councils with the Bible itself, or rather, how Protestant leaders read the Bible. Calling the Word of God what is actually your INTERPRETATION of words of men writing in the name of God is stretching things beyond any bounds of logic you can imagine, which is why Christians constantly emphasize faith as their standard.}

The Protestants under Martin Luther and John Calvin moved Christianity in a better direction. But in my judgement, the only ones that got it right in the end were the Unitarians, of Poland, Romania, and England, the spiritual ancestors of today’s Unitarian Universalists in the USA.

Meh, I don’t know. In his The Protestant Ethic and the Spirit of Capitalism, the sociologist Max Weber made an airtight argument and convincing case that capitalism rather than originating with European Jewish mercantilists of the late middle ages and early Renaissance was actually the spawn of the Protestant Reformation and its peculiar form of Protestant ideology.

That aside, there is another quite under-appreciated German Protestant figure whom I think got it right, and that was Jakob Böhme.

Why did Denis MacEoin Leave the Bahá’í Faith?