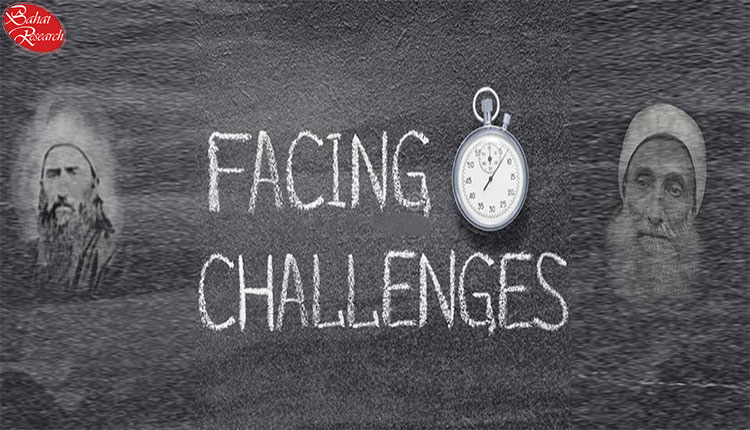 Mirza Ali Mohammad Bab declared himself as the Promised Mahdi of Islam, and determined a Promised One for his new faith, and named him “the one who will be manifested by Allah” (Man yozherahollah).

The Bab’s will read: “God is greater, much greater. This is a letter from the Dominant Eternal God to the Dominant Eternal God [sic]. Say everyone begins from God. Say everyone returns to God. This is a book from ‘All Before Nabil (a code name the Bab used to refer to himself) to the person whose name [in ABJAD code] is equal to the name Wahid (meaning Mirza Yahya Subh Azal) who is God’s remembrance for the world. Say everyone begins from Nuqtat al-Bayan (meaning the Bab) [and] that O he whose name [is equal to] Wahid, protect what has been revealed in the Bayan and command to it for you are a true and great path.” An image of the will has been printed in p. 19 of the Persian introduction of the book E.G. Browne, Nuqtat al-kaf (Leiden: Brill, 1901).

He believed that God would appoint some Mirrors (Meraats) after his death, and before the time of “the one who will be manifested by Allah” (Man yozherahollah).

Those Mirrors would lead his followers according to divine revelation, and in case of their absences, the great learned Babis (The Martyrs of Bayan) would be the leaders.

Bob’s mysterious remarks and theories in the book of Bayan provided the ground for many challenges and abuses among his followers and Babis. For example, the position of The Martyrs of Bayan in Bab’s Faith and whom had already appointed by Mirza Yahya Subh-Azal.

Also, we can show a kind of administrative organization for leading Babis during the secret life of Mirza Yahya Subh Azal in Baghdad. In another hand, the solidarity and coherence of Babis was not the art of initiative and endeavor of Mirza Hussein Ali alone.

When the matter of the leadership of the Babis was brought forth, Baha’u’llah labeled his brother—Mirza Yahya Subh Azal, who according to the will of the Bab, was his successor—with all kinds of profanities.

He revealed all the inner secrets between them and tried his best to ruin his reputation. He even went so far as calling him, and all the rest of his deniers, donkeys, cows, and dung beetles:

“Oh, you donkeys! Whatever God says is the truth and will not become void by the words of the polytheists. Oh followers of Baha let these bogus dung-beetle like bodies to be occupied with their filthy dirty stinky beliefs. By my true self, the nose of the cow has no share from this purified perfume.” (Baha’u’llah, Iqtidarat, p. 58)

Have in mind that this degree of politeness emanates from the same Baha’u’llah that says:

“Politeness is one of mankind’s traits that distinguishes him from other [creatures]. He who has no success in [being polite] then his demise certainly has —and will have— priority over his existence.”

According to Baha’u’llah, it is better for someone who is impolite and rude to cease to exist than continue living in their current state. Fazel Mazandarani has collected a list of rude titles that Baha’u’llah had given to his brother. We will mention a number of these below:

When Mirza Yahya Azal started opposing the works, deeds, and words of his esteemed brother (Baha’u’llah) in Edirne.

“He dropped down from his [high] stature and the rank of union and agreement [that he had with Baha’u’llah] and was gradually—in the tablets, works, and revelations [from Baha’u’llah]—referred to with codes, references, and names such as the polytheist, the calf, the scarab (dung beetle), the tyrant, the Satan, the devil, the foul swamp, the buzzing of a fly, and similar names.”

Regardless of his own impolite style and context, Baha’u’llah recommends Bahá’ís not to be rude:

“Oh, Party of God! I recommend you to be polite, for the first status of [politeness] is that it is the chief of morality. Blessed is the person that is illuminated by the light of politeness and decorated with the style of honesty. The holder of politeness has a great rank. It is hoped that this oppressed one (meaning Baha’u’llah) and all be successful in it, adhere to it, cling to it, and be witness to it. This is the firm decree that has flown from the pen of the Great Name and has been revealed.”

Why did ‘Abdu’l-Baha have such a Low Opinion of Africa and Africans?