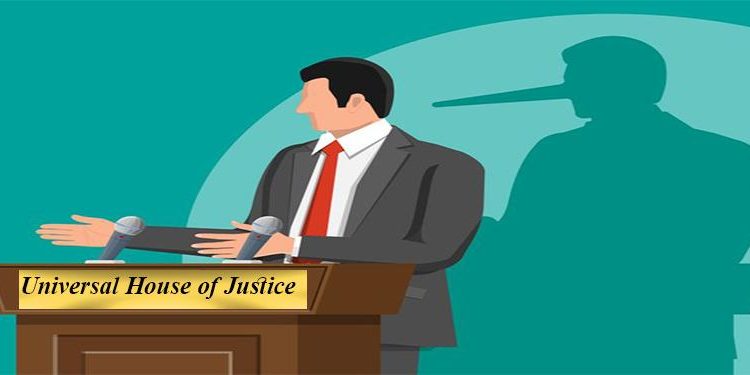 The Bahá’í Faith as it stands today faces a challenge of becoming irrelevant to the sayings of Baha’u’llah and Abdulbaha. Having failed to attract converts and not getting acceptance from the world society, the Bahá’í Faith today is trying to serve itself as a religion in terms of writing OPEN LETTERS (as against Holy writings!!) that have no bearing whatsoever on the targeted people.
Very recently we heard about a petition made by 31 imminent Indians to the Government of Iran, on another occasion we heard that Bahá’ís wrote an irrelevant letter to the people of Egypt. There was again an ‘Open letter’ in the Wall Street Journal republished Dr. Kishan Manocha, Director of the Office of External Affairs of the Bahá’í community of the UK. The document, dated 7th December and addressed to Ayatollah Mohammad Sadeq Larijani, stating the injustices meted out to Iranian Bahá’ís. Many more open letters must be in the pipe line.
These open letters afford Bahá’ís opportunity to be in touch with Media, non-governmental organizations, various government officials and prominent individuals.
Although The Guardian of the Bahá’í Faith has forbidden Bahá’ís to take part in any such campaign, which is political in character, the present Bahá’ís have resorted to this as a last measure. Extract of the Guardians advice is indicated below:
“The Bahá’ís should refrain from signing petitions designed to bring pressure on the Government which may have any political character whatsoever. There are so many other people who can carry on progressive types of activity, but only the Bahá’ís can do the work of Bahaullah”… (Shoghi Effendi, dated March 19, 1946, in The Unfolding Destiny of the British Baha’i Community, p. 44)
The Bahá’ís know it very well that these reactions will harm the Bahá’ís in Iran but the fact is that the UHJ wants MARTYRS IN IRAN so that they can shout BLOOD, BLOOD, BLOOD, Money, Money, Money. The Bahá’ís of World have done nothing to help their fellow Bahá’ís inside or outside of the Iran. They have been content to benefit economically and extract cheap propaganda for themselves. The Bahá’ís are an inward-looking community which can sacrifice its own people for monetary gains.
We see so much injustice and oppression prevailing in the world, and thousands are dying, but the only thing that comes to the mind of Bahá’ís is perceived threat, violence to themselves. No mention is made of the fact that Jews, Christians and Muslims have been threatened or attacked. The Bahá’ís seem to judge the justice of a regime according to how well it treats the Bahá’ís. An unjust regime treating the Bahá’ís well is tolerated or even extolled, while a popular regime which deprives Bahá’ís of certain freedom (perhaps along with other religious groups) is regarded as evil.
When UHJ was approached to give a statement on ‘Iraq invasion’ it said that we follow the policy of noninvolvement in politics. This ‘noninvolvement’ tag on Bahá’ís are ‘get-out passes’ from just about everything.
Needless to say, the Bahá’ís are gradually gaining a reputation for hypocrisy and self-interestedness. The world of Internet has exposed the Bahá’í Community that has a deliberate agenda of using education/educational institutions/educational programs to promote their activities and their faith. The Bahá’ís also have a deliberate policy of targeting prominent people, including teachers and other educationalists –all influential strata of society. Issues of common concerns are used to attract these strata but without making apparent it is the Bahá’í Faith propagation that gets priority. Crowds are drawn in the names of these prominent personalities but intentions are different.
Look at how events are twisted to know the true character of the Bahá’ís. Bahá’ís were caught teaching Bahá’í Faith to the children in IRAN, which is an illegal activity in Iran. Instead of humbly accepting their mistake, the Bahá’ís said they were teaching the underprivileged children (knowing Bahá’í nature this can only be far from truth!!!). Bahá’ís indulge in such ‘social’ activities (read ‘anti-social’) for influencing the children of other community not only related to Iran but in many countries where such activities are not seen appropriate. A question arises in one’s mind –is need of education in Bahá’í community totally established that they have to educate only other communities?
In Uzbekistan, during a police raid, the Bahá’ís were caught proselytizing the children as young as 10 years about Bahá’í Faith. On being questioned, if they had the consent of the parents, they said, “we were having tea together and for having a cup of tea neither the consent of parents nor any authority is required”. Have you heard ten year olds having tea with matured men? Needless to say the Bahá’ís were immediately deported out of Uzbekistan.(1)

In India they said, “We are creating Promoters of the Community Well-being”. When the Bahá’ís were taken to the police station, Bahá’í officials said that “we were conducting practical for these students”. They were told that schools were better places for the students to get their practical training. On further questioning, the students confessed that they were going to villages for conduction of Bahá’í religious classes for children and youths and they were told by their teachers that their course will be completed only when they do theseactivities. The teacher had also warned them to be ‘TACTFUL’ while propagating the Bahá’í religion. On seeing the Bahá’í books it became clear for the Police that it was a conversion class. As the ‘Ruhi Book’ that they were having, contained Baha’i religious material and chapters such as “UNDERSTANDING THE BAHA’I WRITINGS.”(2)

In Indonesia the Bahá’ís were arrested and prosecuted under the Law of Child Protection (23-2002) trying to convert children of other faith as young as 9 to 10 years. The Police found that there is very compelling evidence for the crime and violation of law of land. The Indonesian Government requires that Religious groups and social organizations must obtain permits to hold religious concerts or other public events. Permits usually are granted in an unbiased manner; unless there is concern that the activity could anger members of another faith who live in the area. Bahá’ís had once again violated the code of conduct.(3)

In 2008 in Yemen four Bahá’ís, Mr. Zia’u’llah Pourahmari, Mr. Keyvan Qadari, Mr. Behrooz Rohani and Mr. Sayfi Ibrahim Sayfi, were arrested and deported on charges of “proselytizing” in a manner against Yemeni law.
Reports are also there that the Christian priests have warned the Bahá’ís, in no uncertain terms, that they should conduct the Ruhi book courses only with Bahá’í children and not with non-Bahá’í children. With such frustrating experiences the Faith has no option but to gain sympathy from world by writing ‘Open Letters’. The world has now seen the true face of Bahá’ís and can no longer be deceived. History has never seen such deception ever. The Bahá’ís should spend rest of the time left for the Faith and reflect on validity of their Faith and the hoax care-takers of the Faith (the Universal House of Justice).

Reality will not be hidden then. In the interest of humanity this is a MUST.