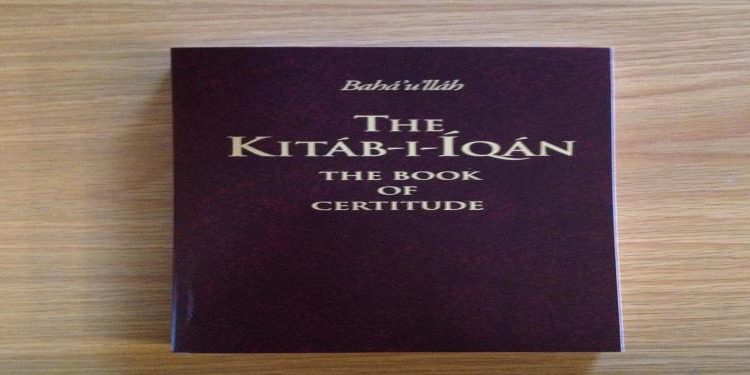 According to Shoghi`s, ketab-i-Iqan (the book of certitude) is the oldest and the greatest book of Bahá’ís. This book is written by Mirza Hussein Ali-e-Baha in 1277 or 1278 or 1280 A.H. in order to prove the claims of Ali Mohammad-e-Bab. In this book, he calls himself “Abd-e-fani”(the ephemeral servant) and calls his younger brother who was Bab`s successor “Masdar-e-amr” (the source of revelation) and “Kalame mastoor” (the hidden word). He also calls Bab “Noqte-e-ula” (the primal point).

Iqan was supposed to be the complement of Bayan but it completed only two chapters of it and the rest has not been written until now.

This book indicates the author’s faith (Mirza Hussein Ali Noori known as Baha’u’llah) in Bab’s claim. He granted no privilege and position for himself and wrote the book to influence Bab`s uncle (Siyyid Mohammad) and make him one of the followers of Bab. Siyyid Mohammad had gone to Iraq for visiting the holy places when he read this book and it didn’t influence him any more and he continued to believe in his father’s religion until he died.

He was buried in the holy tomb of Shah-e-Cheragh in Shiraz according to his testament and it proves that he was a Muslim when he died.

Mr. Mohit Tabatabai who is a researcher believes that this treatise is a model of Persian prose attributed to Siyyid Bab. Baha`u`llah was trying to prove the trustworthiness of Bab`s claims by means of this book and at the same time he was practicing to complete the Persian Bayan.

According to Shoghi’s, Mirza Hussein Ali (Baha’u’llah) was trying to complete “Bayan” by writing this book. “Bayan” is an incomplete writing of Bab which was supposed to have 19 units, each containing 19 chapters (totally 361 chapters) but Bab didn’t finish this book until his death and it is still incomplete now.

Mirza Hussein Ali wrote this book when he was in Baghdad. he had returned from SulaymaniyyihMountains at that time. He had gone over there because followers of Bab was pessimistic toward him and they believed he was planning to abandon his younger brother from succession of Bab so he had no other choice and was obliged to take a refugee over there with the name of “Dervish Mohammad”. He was living with Sunni dervishes for about two years and the influence of their thought is obvious in his writings.

In 1308 A.H., a year before his death, Mirza Hussein Ali sent his elder son Mirza Mohammad Ali who was called “Ghosn-e-akbar” (The great branch) and his secretor Mirza Aqa Jan-e-khadem from Akka to Mumbai to publish his manuscripts .Mohammad Ali published his father’s manuscripts and then announced that all the previous copies are untrustworthy and should be corrected according to the new published copy. (and Bahais are indebted to him for his efforts in publishing their leader’s manuscripts although after a time, they  called him “the contradictor” because of his discord with his brother- Abbas Abdul-baha- on the case of succession, the one who finally became the leader of Bahá’ís after Baha’u’llah).

Besides these perversions, many mistakes in dictation, composition, and narration were corrected in the newly published version. These perversions should be explained much more, but it’s not suitable for this article.

This book also was criticized by many experts both literary and conceptually. Some of them indicate 84 errors and some 154 errors in the case of denotative and connotative differences and mistakes in the published copies and manuscripts. Also it has made some changes in Quran verses and Islamic narrations. Critics have also criticized the argumentation principles of this book, which are against logic and common sense.

We will mention the arguments of these critics in next articles.

2- History and motifs of writing Iqan

As it was mentioned Shoghi believes that Iqan is the oldest and greatest book of Bahai religion where he says:

“Foremost among the priceless treasures cast forth from the billowing ocean of Bahá’u’lláh’s Revelation ranks the Kitáb-i-Íqán (Book of Certitude), revealed within the space of two days and two nights, in the closing years of that period (1278 A.H.—1862 A.D.). It was written in fulfillment of the prophecy of the Báb, Who had specifically stated that the Promised One would complete the text of the unfinished Persian Bayán, and in reply to the questions addressed to Bahá’u’lláh by the as yet unconverted maternal uncle of the Báb, Hajji Mírzá Siyyid Muhammad.” (God passed by, p.88)

As you see, Shoghi believes that Iqan was written by Baha`u`laah in “1278 H.A.” andclaims” it’s revealed within the space of two days and two nights“ and He stated that Iqan is a complement of “Bayan”.

But actually he has made some mistakes in his statements.

Therefore, followers of Bab should find another “Promised One” to complete both Persian and Arabic versions of Bayan; the one who“would complete the text of the unfinished Persian Bayán” while completion of the Arabic version will make the conditions much more complicated.

The other mistake of Shoghi is about the date of writing of the book. He stated that Baha`u`llah finished Iqan in 1278 A.H. he may find this date in Baha`s statements in Iqan where he says: “They (Babies) have been afflicted with many misfortunes for about 18 years”.

So adding 18 to 1260, the time of Bab`s claim as “the Bab”, equals to 1278 A.H. But Shoghi has forgotten another statement of Mirza in his book where he says: “Up to now, 1280 years has been passed from the time of point of Quran”. By this statement, Baha’u’llah notifies that he was writing the book in 1280 H.A. It means writing of Iqan is lasting at least two years.

So Shoghi`s statement about revelation of Iqan during two days is an exaggeration which caused a big challenge for Bahá’ís and made the words of their last leader untrustworthy.

Another issue which was mentioned in the first part is the faith of Bab’s uncle (Siyyid Mohammad). It was said that Mirza Hussein Ali (Baha’u’llah) wrote the maternal treatise (which was called Iqan afterwards) to “reply to the questions addressed to him by the as yet unconverted maternal uncle of the Báb, Hajji Mírzá Siyyid Muhammad.” and his goal was influencing Siyyid Mohammad and inviting him to follow Bab. And later, Abdul-baha claimed that Siyyid Mohammad had converted to Babi Faith. In contrary to Abdul-baha’s claim, historical researches indicate that Siyyid Mohammad was a religious Muslim when he died.

Siyyid Mohammad Mohit-e-Tabatabai has researched about it and has written two documented articles and put them in the website of Bahairesearch.com. He has used some history books including “Tazkereye Fasaei” which is about the biography of scholars in Shiraz to reject Abdulbaha`s claim.

Furthermore, if he was follower of Bab, he would be known by people like other followers who were present in Badasht.

By the way, even if we accept his faith in Bab’s claim, it wouldn’t prove the validity of Iqan. We have to take a closer look at the content of the book to analyze it and this is what we are going to do in upcoming articles.

Iqan is one of the most important books of Bahá’ís and it is written to prove the trustworthiness of Bab`s claim and to invite Bab`s uncle (Siyyid Mohammad) to Babi Faith.

In contrary to Shoghi`s claim about the completion of Bayan by “The Blessed Promised”, two chapters of Iqan added only two chapters to Persian Bayan and now, 197 chapters are remaining.

We will discuss the literal and conceptual errors of this book in next articles.

The Teachings and Will of ‘Abdu’l-Baha